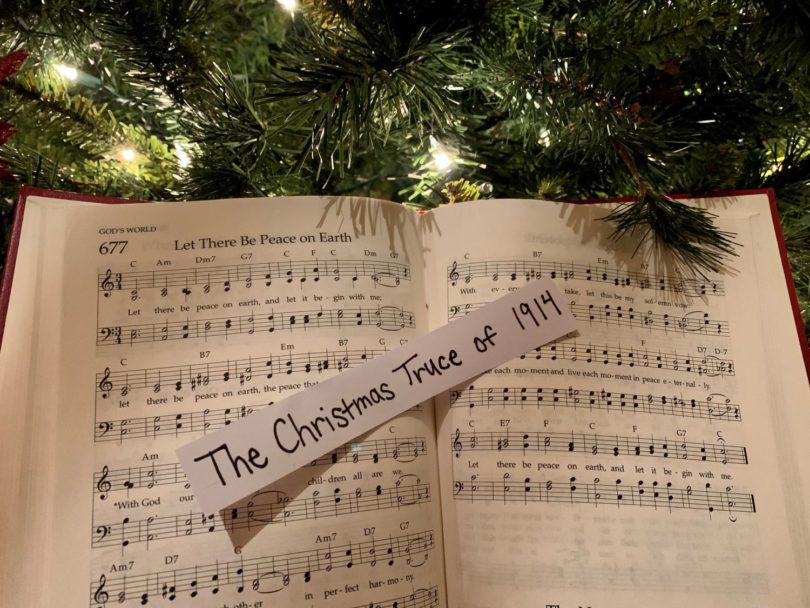 Pekin, Illinois, U.S.A. – Without much joy, I trudged through my Global Studies textbook reading and annotating only the assigned pages. Trust me, I wanted no more work than what was required of me.

Over a century ago, World War I was raging throughout Europe. The “war to end all wars,” which would eventually claim the lives of millions, saw no end. Darkness had seemed to conquer the world.

Yet a brief moment of light prevailed.

“Silent night, holy night. All is calm, all is bright.”

One hundred and seven years ago, on Christmas Eve in 1914 across the Western Front war zone, Belgium, French, and British troops ceased fire, emerged from their trenches, and went out into no-man’s-land and offered Christmas wishes to the enemy, the German troops.

The Germans did the same.

Just hours before, the brutality of war grasped both sides of the fight, but in the moment, all fighting, killing, and shooting was forgotten.

In the harshness of war, between the fight over good versus evil, humility could not be forgotten. Those soldiers saw each other as human, no matter what side of the war they were fighting.

A true Christmas miracle – humanity at its finest.

The start of the Christmas Truce is a mystery. Some witnesses said that they saw angels in the sky, which encouraged them to make peace. Others heard Christmas carols being sung from various trenches.

Imagine the sound of hundreds of people singing familiar carols in many languages. Though the soldiers spoke in many tongues, it was the music that connected them all.

When Christmas Day arrived, Allied soldiers met the Central Power soldiers and greeted each other with a simple, “Merry Christmas.”

Gifts were exchanged, soldiers buried the dead, and, yes, even a game of soccer on the battlefield was recalled.

On December 26th, 1914, fighting for the Great War resumed as if nothing had happened at all.

Even during a deadly world war, the Christmas spirit could not be forgotten.

Years later and wars later, attempts have been made to recreate a Christmas truce, but none has ever compared to that very first truce in 1914.

Some people may deny that this event even occurred. Others may say that it is simply a myth.

Christmas around the world is a time for miracles, and the Christmas Truce is pure evidence of that. Years later, it remains a precedent of joy and hope during one of the darkest moments across the world.

Though war may often be desired, the truce manifests that we humans are connected through one longing – peace.

In our world today, it may appear impossible for any sort of tranquility. Yet, it was possible in 1914.

What better gift did history give us than that Christmas Truce for the ages to behold.

“Let There be Peace on Earth.”

Norah Springborn is a Senior Reporter with Youth Journalism International.