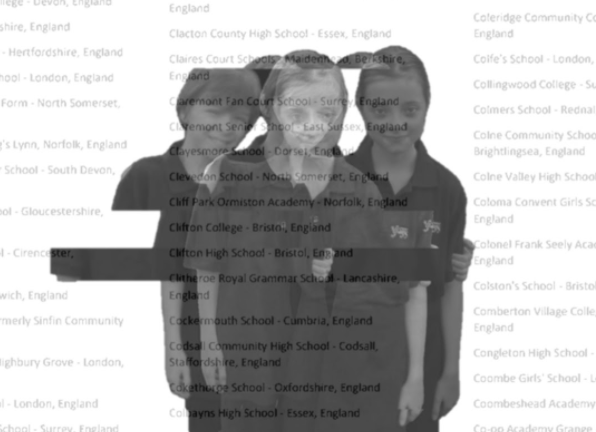 UNITED KINGDOM – After widespread engagement and responses to sharing her experience of rape culture on Instagram, Soma Sara of England founded Everyone’s Invited in June 2020 as a space for survivors to share their stories.

Since its founding, over 50,000 anonymous testimonies have been submitted and shared.

Sara, 22, and other activists hoped this movement would spark action to end rape culture in education and wider society.

One of the most shocking revelations was a list of more than 3,000 primary and secondary schools in the UK as places where sexual assault occurred.

After the list of schools surfaced, the UK government asked the Office for Standards of Education to conduct a rapid review of sexual assault within the education system.

This review aimed to investigate the effectiveness of current safeguarding measures, communication between local authorities, the support of victims and schools’ sex and relationship curriculum and much more.

Laura Coe, 24 of London, a previous attendee of one of schools on the Everyone’s Invited list, said she “wasn’t surprised” to see her school there.

When asked whether the revelation changed how she looks back on her school experience, Coe said, “Yes, but I think events over recent years, particularly the #MeToo movement, has forced women everywhere to look back at our lives and experiences.”

A former male student of a listed school recounted the mindset of some of the student body.

“Assemblies and form times about consent and rape were met with laughter from students and apathy from staff,” he said, speaking on condition of anonymity because he feared possible career repercussions.

He described the ignorance of male pupils towards the issue at the school, which is co-educational in the final two years of schooling.

“These boys have never been educated on how to treat women, and they have never been self-aware enough to address the issue themselves. It is a sad reality that for most boys in boys’ schools, sexual assault is funnier than it is troubling,” the former student said.

Girls often don’t realize what is happening and ignore the behavior, according to Coe.

“As women, we often brush off things that happen to us, or are conditioned to by society,” said Coe. “I can reel off countless sexual harassment incidents that happened at that school, but would never have labelled them as such at the time.”

Wymondham College, another of the listed schools, sent out a letter to parents and students addressing the schools’ plans to tackle the issue surrounding sexual assault and abuse. Such steps included an anonymous helpline for students to report any current or previous experiences and fears (0800 136 663) and a stress on education. It stated that all students will receive lessons providing key messages around how to deal with harmful or unhelpful relationships and consent.

This is not the first time British schools have been called out.

In 2016, the organization End Violence Against Women released a report called ‘All Day Every Day’ which details how the government guidance for schools’ response to sexual assault is unlawful and is resulting in a lack of support for young women.

And this year, an investigation published by UN Women UK found that 97% of women aged 18 to 24 in the UK have been sexually harassed.

Coe praised those who came forward to call out sexual assault and harassment.

“I am in such awe of the people coming forward about their experiences at my school and how poorly (if at all!) they were dealt with,” said Coe. “I know I, for one, probably wouldn’t have been brave enough.”