LE HAVRE, France – It’s true that we haven’t quite grown up with Tintin the way we’ve grown up with, say, Harry Potter, but a Steven Spielberg-directed movie about the boy reporter with his orange tuft of hair, characteristic trousers – who knows whether they are tucked into his socks or just plain short? – and faithful dog Snowy wasn’t going to pass unnoticed.
Now that it’s finally here, what’s it really worth?
The film begins at a crowded flea market, where Hergé himself is sketching Tintin’s portrait, and chattering to him all the while in accented English.
Soon after, Tintin discovers and buys a beautiful model ship, and is accosted successively by two men keen on giving him any price for it.

So far, so good: the viewer is all set for a trip into the world of The Secret of The Unicorn – until the moment that it’s clear the ship wasn’t meant to be a gift for Captain Haddock (indeed, Tintin hasn’t met him yet).
Tintin sneaks around Marlinspike Hall (a Mr. Sakharine is living there) and the man who is shot on Tintin’s doorstep dies only after having written the word ‘Karaboudjan’ in his own blood on an old newspaper.
Any die-hard fan of Tintin, the comic book adventure series by Hergé, would be able to note the inconsistencies of the screenplay when compared with the original storyline, but any die-hard fan of Tintin would also slowly grow enthralled with this fabulous adventure that merges elements of The Secret Of The Unicorn, Red Rackham’s Treasure and The Crab With The Golden Claws.
Spielberg and his team also add a great deal of new elements to the adventure.
The Castafiore not only sings an aria but is also put to use as a ‘secret weapon’ by the bad guy, and Omar Ben Salaad’s breathtaking palace is also entirely imagined. 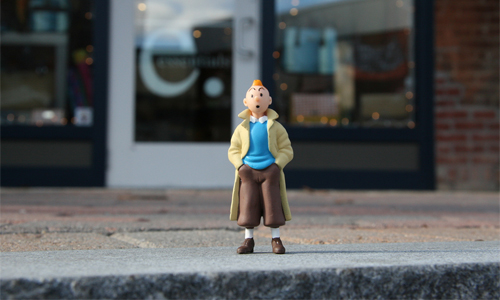 Indeed, the brilliance of 3D motion capture shows through once again in this film – no one is entirely sure how it works, but boy, are those shots beautiful!
The desert, the sea, the Moroccan palace and historic battles upon the Unicorn —  they’re all there to make your heart beat fast, be it with suspense or fascination for how far cinema has come today.
Captain Haddock’s nose is a little larger than one would imagine, but he’s just as much of a good-hearted drunkard as he should be, and his distinguishing innovative swear-words are very satisfactorily represented throughout the film.
Tintin has a star cast including Jamie Bell in the title role, Andy Serkis as Captain Haddock and Daniel Craig as Ivanovich Sakharine, as well as French stand-up comedian Gad Elmaleh, who is unfortunately rather forgettable in his role as Omar Ben Salaad.
So what’s the verdict?
To put it simply, Tintin is a fun family movie for a Sunday night, sustaining the timeless tale of the young reporter setting all wrongs right, and always getting out alive.
If you expected a masterpiece, you might be a little disappointed, but if you’re feeling a little nostalgic for Snowy’s antics (or Thomson and Thompson’s), the film provides a nice trip down memory lane.

One doesn’t need a very high IQ to suspect that a sequel is probably in store – the film very clearly ends on the note that there is more to come, and besides, we haven’t even seen the old scientist Calculus yet!
It is with mixed feelings that one ultimately leaves the theater, wondering, on one hand whether it was really worth the price of the ticket, but glad, on the other hand, to have discovered that Tintin’s eyes are of a deep, deep blue.
Sara Chatterjee is a Junior Reporter for Youth Journalism International.