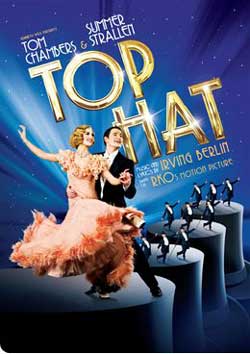 PLYMOUTH, England – I put on my white tie and top hat (only metaphorically speaking of course) recently and went to see the timeless Irving Berlin classic, Top Hat.
Originally a musical written by Berlin for film in the 1930s, Top Hat starred the legendary dancing duo, Fred Astaire and Ginger Rogers.

Top Hat is the story of a debonair young Broadway dancer named Jerry Travers, played by Tom Chambers, who falls in love with the feisty Dale Tremont, played by Summer Strallen.
Hilarity ensues when there is the classic farcical mix up and Dale thinks that Travers is her best friend’s husband which leads the pair into all manner of situations from a spontaneous dance in the rain to Dale’s hasty marriage and divorce of Alberto Beddini in an unsuspecting Venetian Hotel.
The production that is touring the UK is the musical’s first ever appearance on stage, yet it seems to have been tailor-made for theater.

I have my fingers and toes crossed that it will get a much deserved go-ahead to transfer to the West End.
Berlin’s score is full of nostalgic classics from “Gentlemen prefer Blondes” to “Let’s Face the Music and Dance” which transport you back into the days of Hollywood glamour, evening dresses and top hats and coattails.
It really reminds you of the early days of musicals being a very different kind of show from musicals such as The Sound of Music or Cats.  Although one could argue there aren’t many truly “show-stopping” numbers, it is a genuinely lively and entertaining musical.
Strallen and Chambers admirably stepped into the dancing shoes of Astaire and Rogers – it was easy to forget you weren’t watching the two legends on stage.
Chambers really captured Astaire’s debonair grace and humour as well as all of his fancy footwork.
Strallen proved herself to be the Ginger Rogers of our time as she spun, twirled and glided across the stage – in high heels.
It just goes to show that anything men can do, women can do in heels!
The whole cast was superb and I, personally, immensely enjoyed the chorus numbers where the cast danced in unison – a truly amazing feat.
Congratulations must go out to choreographer Bill Deamer who helped bring the well-known routines from screen to stage. 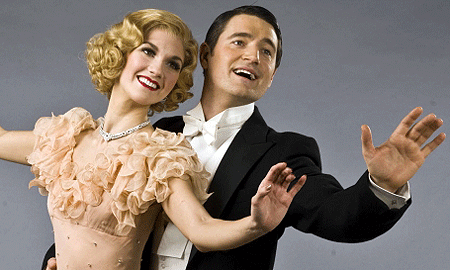 Apart from the dancing, two other characters really stole the show at times.
The first, the hot-headed and rather egotistical Alberto Beddini played wonderfully by Ricardo Alfonso, had great comic timing and really commanded attention when he was on stage.
And, of course, a classic comedy would not be a classic comedy without the supercilious, seemingly omniscient butler. In this case, it came in the form of Bates played perfectly by Stephen Boswell.
The costumes were gorgeous period pieces designed by Jon Morrel. A particular favorite of mine was Dale’s ostentatious, feathery white ball gown.
The set, designed Hildegard Bechtler, seamlessly transported the audience from New York to London to Venice.
What I really liked about the show was that it had that clean, laugh-out-loud humor, which is so rarely found nowadays. The show does contain some confusing messages about relationships:  To you young men out there pursuing a girl – a public slap in the face does not a declaration of love make – as a smitten Jerry Travers seemed to think as he exclaimed “She loves me!” after Dale tempestuously stormed out of the room.
Although it is not in the formula of a modern musical, Top Hat is a truly timeless classic that all the family can enjoy.
Bravo to the whole creative team and cast for rejuvenating such a wonderful show.
So if you can, put on your top hat, tie up your white tie, brush off those coattails and get yourself into the nearest theater or watch the original film to well and truly “face the music and dance.”
I saw Top Hat in Plymouth at The Theatre Royal in mid-October. The show is touring and will be playing  around England and Scotland until December10th.