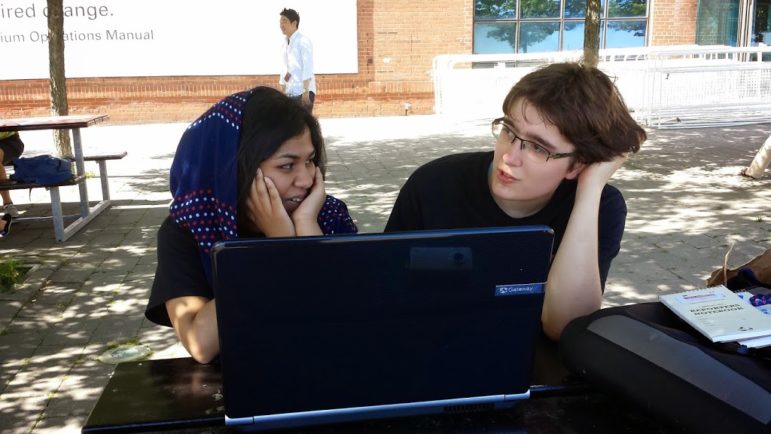 After their paddle boat excursion on Toronto’s Harbourfront, Lubaba Samin of Toronto and Mary Majerus-Collins of Connecticut sit down and try to put it into words. (YJI)

TORONTO, Canada –  Despite being tiring and a painful reminder of our lack of athleticism, paddle-boating was an exhilarating experience.
Aside from the time our friends tragically hit the front of our boat with the side of their boat, being on the water was a very calming experience.
From the water we could see the famous CN Tower peeking out from behind the other high-rise buildings.
Harbourfront was a new site for the both of us, even for Lubaba who has lived here for eight years. Neither of us had ever been down on the pier or seen the ships embarking and docking.

A wooden boardwalk runs parallel to the waterfront, inviting seagulls, boats and ships. People travelled down it, walking, biking and skateboarding.

The crowds were typical for downtown Toronto. Behind the paddle-boat place were a group of tents filled with vendors selling trinkets, an aroma of food from restaurants filled the air and there was a music class going on in a tent behind us as we waited for the boats.
YJI reporters Mary Majerus-Collins and Lubaba Samin wrote this story. YJI reporters bump paddle boats on the Toronto Harbourfront. From left are Lubaba Samin of Toronto, Mary Majerus-Collins of the United States, Caroline Nelissen of the Netherlands and Mugdha Gurram of the U.S.A. (YJI)