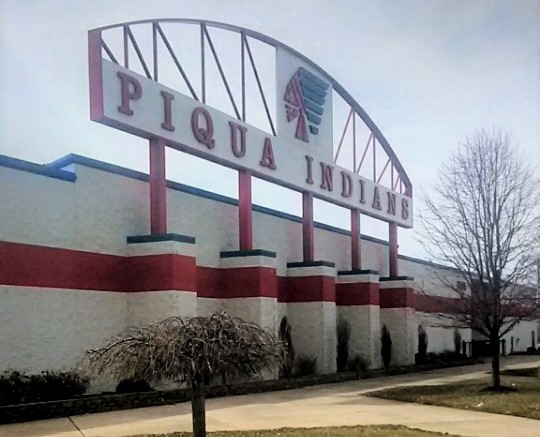 Piqua, Ohio, U.S.A. – Since the invention of organized sports in the United States, teams across the country have used the image or iconography of Native Americans for their mascots.

From football to basketball, caricatures of Native Americans have been prominently featured.

Despite these developments on the national level, little has changed locally. According to research database MascotDB, more than 1,232 American high schools currently have Native American team names.

Piqua High School is one of them. Built in 1981, the school has utilized Native American imagery throughout its 30 years of existence. Although their football team is known as the Piqua Indians, the name is used as a catch-all term for the Piqua City Schools community as a whole.

The team’s symbol is a Native American man, in profile. It is posted on all local merchandise. Alexander Stadium, where the football team plays home games, bears the logo. So does every classroom number.

The school newspaper, which ceased publication in 2020, was known as Smoke Signals, referencing a means of communication used by several Native American tribes.

Even the high school’s address plays on this theme: 1 Indian Trail, with the Junior High School being 1 Tomahawk Trail.

Some students do not find this usage of Native American imagery to be an essential aspect of their school experience.

Sophomore Mark Alexander spent his childhood in Piqua. He sees no cause for offense in the logo which adorns every hallway and classroom but doesn’t find it an accurate reflection of Piqua’s ideals, either.

“I don’t find it offensive per se, but I don’t think it’s the best possible representation. I feel like it’s kind of basic,” Alexander said. “Piqua is known for other things that would work better than just Indians.”

Despite not finding the mascots offensive, Alexander had no problem with teams changing their names.

“I don’t think it’s necessary,” said Alexander. But he said if someone finds it offensive and thinks it is better to change it, he’s fine with that.

Other students were less undecided.

“I don’t feel like it’s necessary,” Gephgil said, citing the legacy and history behind the symbol itself. “We’ve had this logo for so many years, and I feel like if we change it, it’s kind of ruining our brand a little bit.”

At the school’s entrance is a Native American tribal chief’s face, carved into wood and peering out at passersby. Atop the carving is a plaque, which reads: “In honor of the Native Americans who loved and cared for this land, we celebrate their history and culture.”

Superintendent Dwayne Thompson echoed that sentiment. He said he was too busy to talk to a reporter about this, but provided written answers to questions.

¨Like much of Ohio, Piqua has a very rich Native American history,¨ Thompson wrote. ¨More than just the schools, the city itself has many references to our Native American history.  Buildings, signs, mottos, official documents, paintings/murals, tilework on walls, memorials, city vehicles, uniforms and equipment, various news prints throughout the city, local foundations that distribute funds throughout the community, alumni groups, and so much more than I have not listed reference Piqua Indians.¨

Despite that, some have suggested that using Native Americans as mascots is inherently offensive.

Sundance, who uses one name, is a member of the Muscogee tribe and one of Ohio’s most prominent Native American activists. As the executive director of the Cleveland Autonomous American Indian Movement since 2007, he is part of the opposition to using Native imagery in sports.

“Quite simply, the dehumanizing effects of these images inhibit our ultimate objective of self-determination,” Sundance said in a written response to questions.

Use of these kinds of mascots adversely impact the self-esteem and feelings of community worth among indigenous children, according to Sundance.

This statement is backed up by research conducted over the past 20 years by organizations like the American Psychological Association and researchers from Harvard and Michigan University.

Sundance´s advice to those who hope to enact change is simple. ¨Be vocal, agitate for change, and demand justice,” he said.

Addressing the feelings of Piqua residents who consider the image as their heritage, Sundance said, “Racism and bigotry is the heritage of every town in the United States.”

¨I am not aware of any attempt to demean the Native American culture by any members of our community,” the superintendent said.

Last year, Piqua resident Rachel Abbott circulated an online petition calling on the board of education to change the mascot. The petition gained 2,094 signatories – short of the 2,500 needed to force the board to act – before Abbott withdrew it.

“As a Black person who assumed the role of the Piqua ‘Indian’ as one of the football mascots, I stand firmly with those calling for the renaming of the mascot,” Morrow said. “I’m overwhelmingly embarrassed to have taken part in such ignorance and racism and call for the city to take immediate action on this matter.”