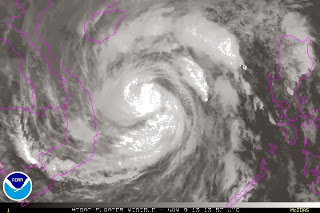 Regiem-Melech
H. Ocampo
Junior
reporter
YouthJournalism International
SILANG, Cavite,
Philippines – Though Typhoon Haiyan made landfall about 500 kilometers away, we
still felt its intensity.
Strong winds
blew and it even removed the tarp in front of our house that keeps the rain
from getting into our terrace.
Rain is
pouring down hard as well.
I felt
terrible, but not because I’m afraid of the storm. Instead I imagined what the people
in Visayas may have experienced near the center of the typhoon.
I thought
about the wind howling and the strong rain outside and how much more of it
there would be in the direct path of the typhoon, the strongest to hit the
Philippines and easily the most severe storm this year.
There are
reports of death and injury, sadly, so I am thankful the storm did not come any
closer to my home.
Weather
officials said the storm had sustained winds of 235 kilometers per hour, or 147
miles an hour, when it came ashore.
It is
expected to hit the coast of Vietnam by Monday after passing through the South
China Sea.