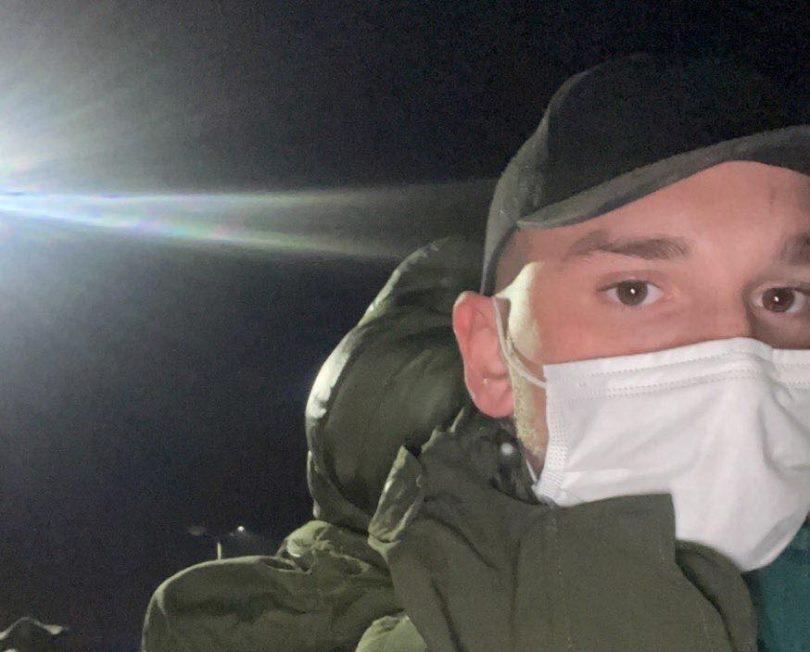 Sitting hundreds or thousands of miles away from the war in Ukraine, many people feel powerless to help those suffering in the most brutal invasion in recent history.

But not Kyle Stark, a 23-year-old from Scotland who traveled to Ukraine to help train other volunteer troops.

Stark, who has a bachelor’s degree in international relations with a focus on humanitarian intervention, was working towards a master’s degree in global security at the University of Glasgow when the war broke out.

With friends in and from Ukraine, Stark wanted to use what he had learned to help. He tried to suspend his studies to join the volunteer effort in Ukraine.

“The university were not cooperative in the slightest,” he said.

“I can sit on my arse and write about something like this” said Stark, referring to his academic thesis, “or I can actually go out and do something.”

Concerns about safety and communication security in Ukraine have caused a spike in usage of apps like these, which have become widely popular for citizens in Ukraine and Russia. Following this theme of better safe than sorry, Stark wouldn’t say exactly where he was, other than at a Georgian training camp for volunteer fighters, situated in Western Ukraine.

Originally, he made plans to join up with volunteer forces in the Ukrainian Foreign Legion, but he said a massive airstrike on the foreign legion’s base at Yavoriv forced him to change plans.

According to a Reuters report, the airstrike in Yavoriv killed at least 35 recruits and injured 130, including foreign volunteers.

Stark explained how the foreign legion changed their vetting process after that attack, only accepting volunteers with demonstrated combat experience. So, he’s helping to create an English-speaking faction within the Georgian National Legion, a multi-national group of volunteer fighters.

But being at a new training camp instead of the frontline didn’t mean he was safe.

As Quartermaster on the base, Stark said, he found himself “effectively fourth in command,” creating training schedules for new volunteer fighters and overseeing their training.

“We have been targeted in the past, nothing serious,” he said, nonchalantly, “but it destroyed our shooting range.”

He clarified this was from missile strikes, and that it wasn’t unusual.

Everyone at the camp had to go into their bunkers almost every day, although he said they were “less so much bunkers as big soviet style cellars.”

The bunkers and other fortifications could protect him and his fellow volunteers from light strikes like the one that destroyed the shooting range, Stark said, but would not hold up against a sustained cruise missile attack.

“We are quite far from Kyiv, but we’re in the west of Ukraine, well within the range of cruise or hypersonic missile strikes.”

Asked what it was like to live with that knowledge and still carry on with his daily duties, Kyle said the sirens have so far alerted them to potential and real danger in good time.

“The sirens are exactly what you would expect, pretty much the same as a WWII siren,” he said. “It’s probably not been changed since then. It’s the typical air raid siren that you would hear in the movies or if you were to find it on YouTube.”

Stark’s response to this very real threat is also reflected in the citizens of Lviv, the Ukrainian city only about 43 miles from the Polish border.

“If you ignored the air-raid sirens, the guys with guns and the sandbags you couldn’t tell there was a war on,” Stark said.

Most shops remain open, he said, apart from bars, which are closed due to Lviv’s current alcohol ban. Western chains like McDonalds, Kentucky Fried Chicken, and Starbucks are also closed, according to Stark. He noted however, that Domino’s Pizza remained open.

People in Lviv have continued to operate with as much normalcy as possible while under the invasion of a foreign power, Stark said, and they speak positively, believing the Russians will be forced to leave Ukraine.

But their optimism hasn’t extended to NATO.

Stark said the locals believe the organization is “all bark and no bite” and “scared of Putin putting his finger on the big red button.”

News coverage of the war has been “fairly accurate,” said Stark. “Obviously, there is stuff the media doesn’t report on that at the moment I can’t disclose.”

“If you ignored the air-raid sirens, the guys with guns and the sandbags you couldn’t tell there was a war on”

Ukrainian President Volodymyr Zelensky’s popularity in Ukraine is not exaggerated, according to Stark. He said he spoke with Ukrainians on the base who said they did not vote for Zelensky, but respected him now and admired the way he had stood up to the challenge.

“He’s been able to really captivate and unite Ukrainians against Russia,” said Stark, who noted an abundance of anti-Russian and anti-Putin posters in places like Lviv.

At the time of the interview, Stark said troops on the Georgian/English base occasionally visited Lviv for morale when they got a day off, as long as they were back by 6 p.m. It was Stark’s job to ensure they did.

Life on the base is okay, said Stark, who said Georgians get on very well with the English speakers, sharing bits of food and cigarettes with one another.

“Everyone knows that everyone is here to help each other out,” said Stark. “It’s quite friendly.”

But the food, made in bulk to feed all the men, he said, “is crap.” Most of the time spent outside of eating focuses on weapon training, medical training, and group training, he said.

Volunteer fighters from the United States and different European nations operate differently, and trainers like Stark try get them working as a unit.

The majority makeup of volunteers is Americans, British and French, said Stark, but they also had Romanians and Poles and even volunteers from as far as Brazil and South Korea.

Stark further explained why he cut his postgraduate studies short and moved to a military base in a country under attack.

“I’ve always wanted to come out and do something like this, whether in a humanitarian or combat role, assisting in zones like this,” said Stark.

Although he isn’t close with his family, Kyle told his grandmother about his plans to leave for Ukraine. She “didn’t mind,” he said. “I’ve come from a military family.”

His great-grandparents fought in WWII. His granddad had been in the Royal Air Force. His step-father saw action in Argentina and Northern Ireland.

His mother was “less than thrilled,” Stark said, but he emphasised it was his choice and what he wanted to do.

“It’s my life, my decision, my career. If it wasn’t going to be Ukraine, it could be Yemen, it could be Saudi, it could be Iraq, Afghanistan, Syria. It could be any other conflict in the future.”

Stark said he doesn’t know how long he will stay in Ukraine, but as an unpaid volunteer, he can’t stay indefinitely.

He’s been adapting to life in Ukraine and its “otherworldly culture,” describing its notable differences in language and society from the UK.

His role on the base involves a lot of communication with Ukrainians and he is slowly picking up the language.

“I’ll probably end up being a local by the time I leave here.”

Like everyone else, he doesn’t know when the conflict will end, but offered some speculation.

“It will stalemate for a long time,” predicted Stark. “The Ukrainians would rather fight to their last man than allow Russians to take over their soil.”

Owen Ferguson is an Associate Editor with Youth Journalism International. He reported and wrote this story.

Tanya Tkachenko is a Junior Reporter with Youth Journalism International. She took the photos in Lviv.