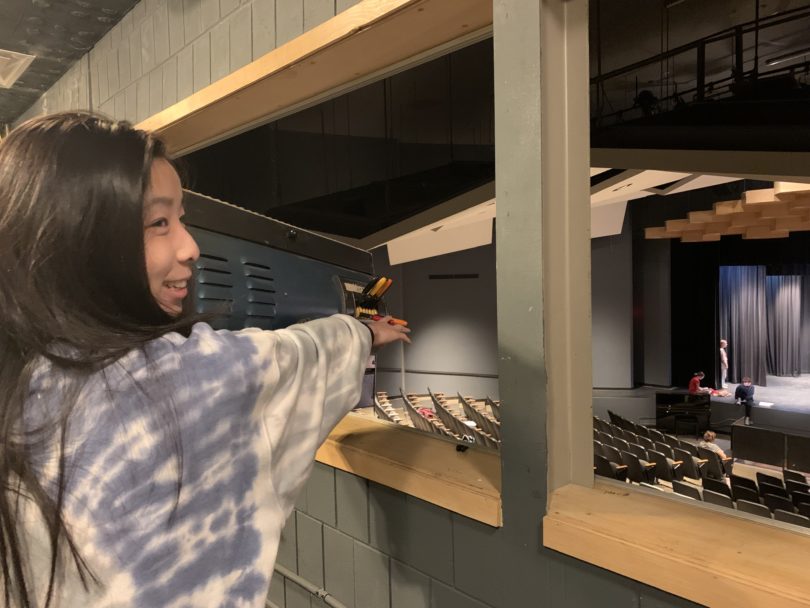 Mya Chau was on the light crew for 'Cinderella.' (Norah Springborn/YJI)

Pekin, Illinois, U.S.A. – The saying “go big or go home” is most prevalent in the world of live theater.

Often, when one watches a production, only the actors who play the lead roles receive the glory. While lead actors do play a huge role in making a production come to life, it is important to draw equal attention to those behind the scenes.

That’s where the “going big” part of a show comes into play.

I’m grateful to have been a part of Pekin Community High School’s production of Rodger and Hammerstein’s Cinderella. If being a part of this musical has taught me anything, it is that it truly takes a village to put on a show. I decided to interview and dig into the work of the crews apart of my own high school’s musical.

From costumes, musical pit, lights, and musical ensemble, it is not just the leads that make a musical come to life.

Sophomore Abby Frye, who was a costume crew member for Cinderella, enjoys matching the costume with the character.

“Everyone has their own style and uniqueness,” Frye explained. “It helps their personality shine through the person they act on stage. Costumes are such a big part of theater since they bring the audience into the scenes along with the time period.”

Frye enjoys the environment of theater.

“Everyone is so supportive of each other. I enjoy seeing how everything comes together. We all know in theater that in order for this whole production to work out, we need to work together.”

“At times it may feel like everything is falling apart, but as we gradually work together with patience, things will work out,” Frye said.

Musicals are not just a play. While both a play and a musical tell a story, it is the music within a musical that makes it so unique.

“Without music, any show would not reach its full potential,” said junior Mercedes Ghidnia, a euphonium player in the musical pit ensemble.

“One of the biggest takeaways from this experience has been that it is so important to collaborate together. Whether that be the leads, the ensemble, the different costume and make-up crews, we are all here to put on a great musical,” said Ghidnia.

“You truly should never lose hope.”

Sophomore Mya Chau, a member of the light crew, enjoys watching the audience’s reaction from the back of the theater for every scene.

“We, most importantly, provide the audience the ability to see,” Chau explained. “We also provide various moods, the means of dramatized situations, and the passage of time in the production. Something as simple as changing the colors of the lights could change the way the scene is portrayed. It is not only the acting that can make a scene a scene.”

Chau said, “There isn’t a specific moment I look forward to during Cinderella, but just watching the production come together from start to end means the most.”

Sophomore Rachel Filarski said she’s learned that dedication is needed in order to put on a successful show.”

“I’m in the musical ensemble which is a huge part of Cinderella. The ensemble adds so much to the storyline in a fun way for the audience to get a true feeling of what is going on.”

Each person who is a part of every musical is united for one reason – the end goal. After months of work, we only have one chance to put on a “perfect” show which is only attained if every crew member, ensemble member, director, and lead work together. That’s what makes a theatrical production so special for all.

“Like any musical, you need to not only act but also sing and dance while acting. The biggest challenge is finding a good balance of learning new things while acting in order to bring the production to life.”

“It’s not easy to put on a show. People need to know how much effort each and every person has put into Cinderella to make it incredible,” Frye concluded.

Norah Springborn, a Senior Reporter with Youth Journalism International, played the Fairy Godmother in her school’s production of ‘Cinderella.’