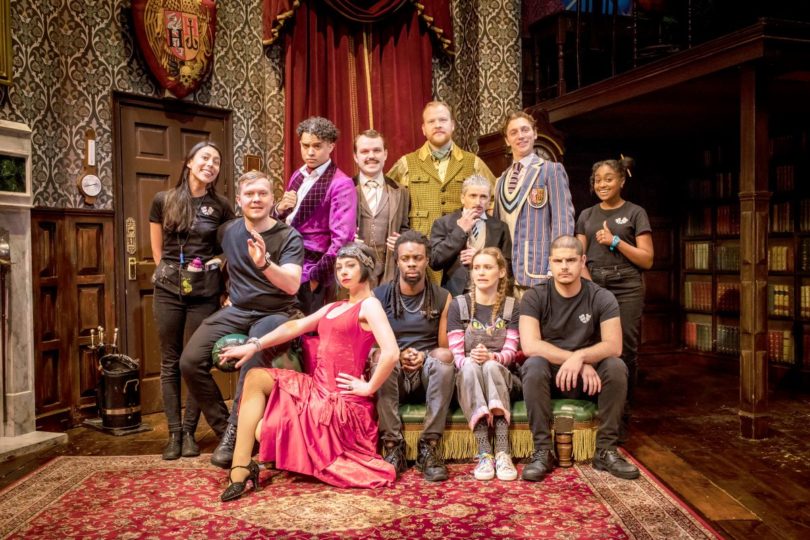 The company of 'The Play That Goes Wrong' at The Duchess Theatre. (Photo provided, credit Helen Maybanks)

Liverpool, UNITED KINGDOM – Since theaters reopened during the pandemic, the way the industry works has had to adapt and many of the stars who keep things going are not the headliners.

Demonstrating an incredible amount of creativity and hard work, understudies, swings, standbys, and alternates have an essential role in keeping productions open.

In a recent Zoom interview, they spoke about their roles in the company and how they have been operating differently during the pandemic.

When not on stage for a principal role, Cheng described her day once she reaches the theater:

“We help set up the stage, put the props out for the show, do some washing up of the glasses that have been used the previous night, we do some other backstage duties that need to be done like a little bit of hoovering – making sure that the stage is ready, basically.”

Additionally, they both help cover any backstage changes, reset the stage during the interval and help clear the stage after the second act.

For Akwafo, stepping on to a West End stage has been her biggest accomplishment since joining the production, as this is her first professional theater job.

“I’ve also never been an understudy before, so there were many firsts for me which has been really fun,” Akwafo said. She said she enjoys not knowing who she is going to be performing as each day and knowing each character’s different assignment for the show.

Last year, Cheng debuted as Denise, which was the first time a female had played this part. She credits this as the moment she is most proud of within the show.

The Play That Goes Wrong is a masterpiece of physical comedy following the Cornley Polytechnic Drama Society as they attempt to perform The Murder at Haversham Manor.

Things end up going catastrophically wrong and they rapidly descend into chaos.

Asked about their experience in rehearsals and learning multiple roles in a massive production, Cheng said, “It’s a very physical show. Even when you’re not on as your role, the ASM duties are also quite physical and I think you’ve got to, as in any show, maintain a level of physical fitness.”

Akwafo mentioned how the company brought in a professional to go through the stage combat in the show, to ensure they were doing it safely and correctly.

Since theaters reopened last year, Akwafo and Cheng detailed the extensive covid protocols and measurements in place to keep their production open. This included testing every day, social distancing as much as possible, wearing a face mask when not onstage and a one-way system around the theater.

“Theater has been trying to get back on its feet for a long time,” said Cheng. “I think we have been very lucky that we were one of the first shows to open and we’ve got really stringent safety protocols in place that mean we can do the show safely.”

Akwafo said it’s important for people to know it’s safe to come to the theater – everything is being done to try to keep audiences and casts safe.

“As long as everyone is following along with protocols and mask wearing, it’s great to be able to come here as an outlet in these times to watch a show like this and to be able to do so in a safe way,” Akwafo said.

A group of drama students from the London Academy of Music and Dramatic Art founded Mischief Theatre in 2008 and performed improv shows at locations and fringe festivals around the UK.

Three of its founding members, Henry Lewis, Henry Shields and Jonathan Sayer, wrote The Play That Goes Wrong. It premiered in a pub theater in 2013 and after years of hard work and perseverance, it became a worldwide success.

“This story of determination and belief in something, I think is quite unique about this company,” said Cheng.

Akwafo added, “It started from where a lot of people start their careers. It shows you what you can achieve when you really work hard and put your mind to something.”

In a time of unparalleled challenges for theater, the multidisciplinary industry has adapted and developed to keep sharing stories with the public – whether comedy, musical or tragedy.

The combined efforts of all involved to keep shows safe and open highlights the versatility of the arts and the role they play within society.

The show must go on.

Rosie Evans is a Reporter and Illustrator with Youth Journalism International.