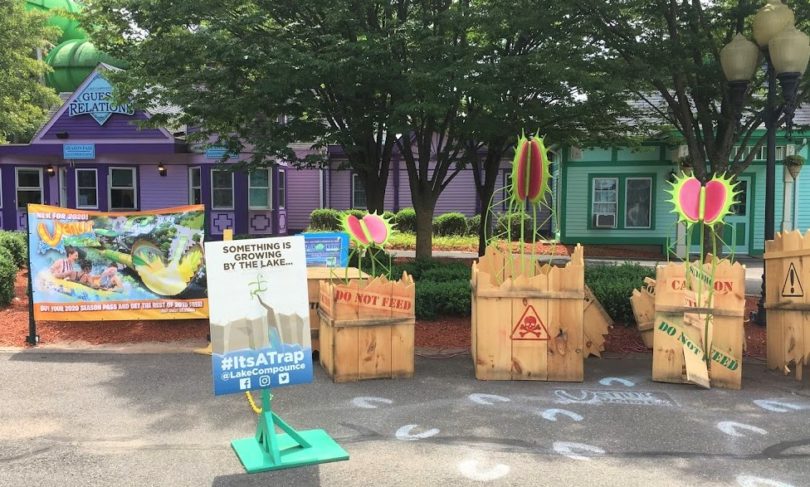 Near the entrance to Lake Compounce, the park promoted its coming attraction, the Venus Vortex. (Joanna Koter/YJI)

Venus Vortex – New England’s first-of-its-kind funnel-shaped slide – is expected to be a crowd-puller, according to Jerry Brick, the park’s general manager.

Riders in tubes will travel down a covered slide that leads to a giant funnel. There, they will go back and forth up the sides of the funnel before exiting on a runaway slide.

Venus Vortex will have a height of 68 feet and riders will experience G-forces of up to 1.5 during the minute-and-a-half long ride, said Brick.

The project and preparation for adding the new slide is underway. White Water Industries in Vancouver, Canada will manufacture the slides and the pre-fabricated pieces of the slides will be transported to and assembled at the amusement park next year. Once installed, the slides will undergo rigorous testing, said Brick, with park staff of all heights and weights riding 350 cycles to weed-out any problems.

“There is no way to secure dummies onto the tubes,” said Brick when asked why the staff would ride the slides during the testing phase.

To ensure a smooth and safe ride, a minimum weight of 180 pounds will be needed per tube. Each rider has to measure at least 42 inches tall to ensure that the physical dynamics of the slide is within the safety limits, according to Brick.

Scales will be stationed before riders slide down to ensure compliance of this regulation. To protect riders’ privacy, the scales will only show if the combined weight to the two riders is sufficient or if the weight is too much or not enough.

Over the next few years, Lake Compounce plans to make other additions to its park and to Bear Creek, its campground.

New amenities, including entertainment options and retail stores, are slated to be installed at Bear Creek.

The park’s ride Wipeout will also be replaced due to difficulty in maintaining and finding spare parts for this tilting carousel ride, according to Brick, who said a replacement attraction has yet to be chosen.

Lake Compounce is constantly refreshing its offerings and adding new attractions to entice visitors to the park. This is good news for the towns of Bristol and Southington, which share the park on a common border and for whom the park is a major employer and economic contributor.