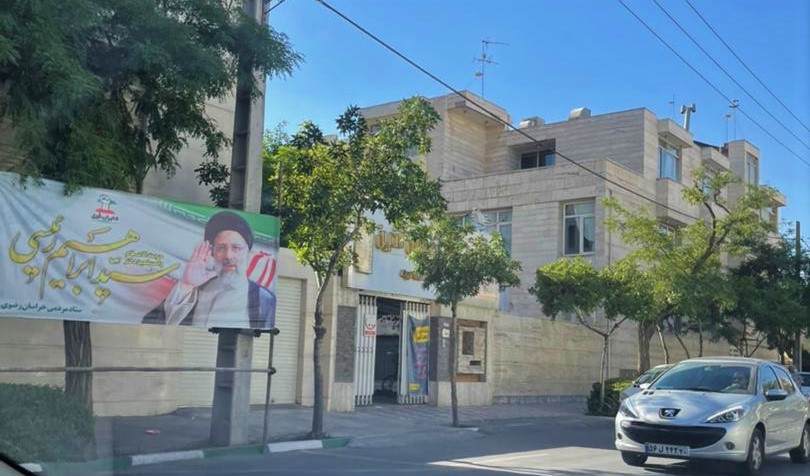 An election banner hangs in Mashad, Iran. (Photo by Sara Zeinali for YJI.)

Tabriz, Iran – Voter apathy among millions of young Iranians has emerged as the most decisive challenge of the candidates hoping to rally millions to the polls for the 2021 Iranian presidential elections today.

It’s possible the turnout could be far lower than that.

The presidential race is expected to unfold as a partial showdown between the conservative front-runner and Chief Justice of Iran, Ebrahim Raisi, and the moderate former Central Bank chief, Abdolnaser Hemmati, his main contender for the office.

Young Iranians eligible to vote expressed concern about a possible backlash if they shared their views publicly. To allow them the chance to speak freely, Youth Journalism International is withholding all or part of their names in most cases. Other identifying information – partial names, ages and places of residence – is accurate.

Maryam, 23 and hailing from the oil-rich Khuzestan province, regards the election as a mere “formality” as her hopes for change are no longer.

“Whom should I support and vote for when I am denied each and every right out there?” she asked.

With a dire pandemic and economic crisis at hand, the candidates have not promised much for women and minorities.

Ali is 24 and resides in Alborz, a province neighboring the capital and roughly 800 kilometers – about 500 miles – norrtheast of Khuzestan.

An election boycotter, Ali doubts the candidates’ competence for leading the nation towards a better future. Lack of media transparency and abundance of misleading information have not encouraged him to participate in the election, either.

“[A few] days ago, I glanced at the news and read that a government official had said advertising against voting is extremely convicted and prosecuted,” Ali said. What came next was even more baffling. “I tried to fact-check [after reading] but couldn’t find the article.”

Ali asked that YJI withhold his full name in fear that his words might be interpreted as “advertising against voting” while, in fact, he has harbored no such intentions.

Majid, 25, is a well-read Tehran native.

“We have been force-fed this illusion of ‘free will/choice’ for almost 24 years,” he said.

Majid’s views on reformists are rather different from his peers, all of whom he considers to be naive.

“The reformists have proven time and again to be ineffectual and uninterested in forging a path to make real, concise, and concrete structural changes in the political system,” said Majid. “The reformists will be quite happy if the entire nation spends years crying over some minor injustice, take the firing of a famous Iranian football presenter from the state TV for an example.”

His critique comes to a discerning end.

“The reformists have figured that they can indulge in such minor issues and come out victorious over hardliners, continuing their joke of a crusade for freedom.”

Just like the hardliners, reformists are not and have never been much of a choice for him. He said he would stay home today.

Reza, 25, is an English teacher in Isfahan, a conservative city. Reza’s decision to withhold his vote arises from his conviction that the elections will not affect the outcome or the overall condition of the people, the youth in particular.

“No government or president-to-be could manage to change our lives drastically,” Reza said.

But there is more to Reza’s decision than apathy and the candidates’ lack of sufficient competence. He intends to discontinue a generational mistake.

“I am not going to repeat the mistake my father and grandfather made because I believe that if they had not voted then, perhaps we’d be leading better lives now,” Reza said. “I know what it feels to be unable to feel happy as a young person under the supervision of such a system.”

For Reza, apparent bias and favoritism have replaced the air of anticipation that comes with the elections.

Disillusionment seems to have taken over the youth despite dismal attempts of a revival spurred by candidates at the eleventh hour. Time will reveal the exact number of hopeless youth, but others beg to differ.

Zoha Afri, 20, is another Tehran native. She said she would vote today as she equates Iran’s power to Shi’ism’s authority, and considers elections as the legitimate way of gaining power.

“When Shi’ism has a say in the world, the Final Imam of Twelve Imams and the Humanity’s Savior, Imam al-Zaman, will emerge sooner,” Afri said. “His emergence will solve all our issues. Afterward, he will build a great state like that of Prophet Solomon. Perhaps even greater.”

Afri said her decision to vote is “for the sake of all of us.”

Despite her steadfast conviction, Afri is unsatisfied with the incumbent government’s handling of the upcoming elections.

“Unfortunately, the government’s performance within these last two terms has left me in a situation that I, as a responsible youth, must encourage others to participate in the very act of ‘voting’ during an election, rather than just rallying my candidate of choice. Election anticipation was much more substantial even back in 2009 despite all the street crowds and difficulties we endured,” Afri said.

An anonymous voter from Tehran, 21, said they would vote on behalf of Haj Qasem (Qasem Soleimani, an Iranian major general assassinated in an airstrike by the U.S. Air Force last year) and the Iranian Supreme Leader, Ayatollah Ali Khamenei.

“I have a vote and a pertinent role in my country’s future,” the young voter said. “I will not lose this opportunity. I will participate.”

Indecision looms over minds of many others as the day approaches.

Tara, 22, a tech-savvy university student from Khuzestan, was indecisive when interviewed earlier in the week.

Despite her apolitical approach, Tara is concerned with the employment selection process, which eliminates potential hires based on their voting record.

“We don’t really have many choices when it comes to employment. If there’s a job slightly related to the government, they’d rather hire someone who’s supporting them. I don’t want to lose an opportunity [over a boycott].” With that, Tara had yet to decide.

With momentum nowhere to be seen, and streets devoid of rallies and election discourse but bearing a few banners, the 2021 Iranian presidential election took place on Friday, June 18, 2021.

A disillusioned nation awaits the results.

Frida Zeinali is a Senior Correspondent with Youth Journalism International.