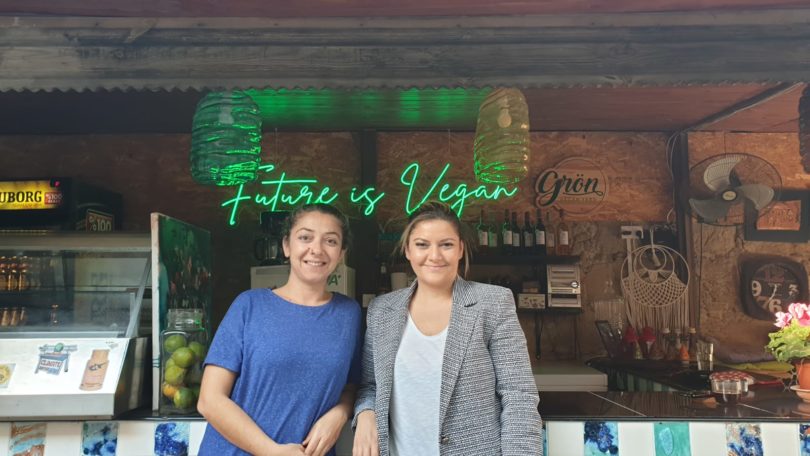 Nicosia, CYPRUS – Grön Vegan Yard, the first and only vegan restaurant in the Turkish Republic of Northern Cyprus, started as a small kitchen in the Old Market place inside the walled city of Nicosia.

From the start they were a “rebellion,” Fezel Nizam said, setting up a vegan kitchen on ‘Butcher’s Street.’

Persevering through the irony, and with an avid use of social media, Nizam and co-owner Nazar Eriskin livened up the desolate street making it clear that they ‘defend life, not death’ while steadily growing their customer base.

It took no time for word of their presence – an anomaly in a culture so dependent on meat – to get around.

After two years, they moved to Alashia Inn, the homey yellow-stone house with a welcoming courtyard. They view the restaurant as “both a business and a platform where we can actively engage in activist discussions with customers,” Nizam said.

Grön is a safe haven of delicious food for vegans, vegetarians, aspiring vegans or those who wish to learn about eating without involving animals. It’s a concept foreign to traditional Cypriot cuisine, which consists of a plethora of dishes using red meat, the famous halloumi cheese, and other traditional meals such as the ‘magarna bulli’ a pasta dish with heaps of chicken thighs and halloumi.

Nizam said that aside from a few snide comments from elderly family members, the response from the community has been positive.

“We were never shunned,” said Nizam. “On the contrary people seemed intrigued by what we were making and the dishes we could produce.”

Especially in younger generations, according to Nizam, there has been a surge in awareness of veganism.

“No matter if they are from either side of this island, or from any country in the world, our door is open to everyone,” said Nizam with a smile.

Veganism, she said, “is in itself a representation of peace.”

Nizam emphasized how they take care to educate those who hesitate when it comes to veganism, especially the families of their teen customers.

They opened up knowing that they wanted to make a difference, Nizam said.

“At a time when everyone said it would be impossible,” said Nizam, they’re finding success – something she attributes to their shared and unwavering belief in veganism.

The women wanted to tackle the stigma surrounding veganism, the immediate increase in price associated with a vegan label and the lack of options for those who are vegan, according to Nizam.

Nizam said she frequently advises those who want to cut out animal products and has noticed that it’s a person’s questioning of their own morals and lifestyle as well as “the acceptance of responsibility and heightened awareness” that can start a journey that ends in veganism.

Their efforts to ‘alleviate the prejudice’ surrounding veganism having created an overwhelmingly positive ripple effect, whereby they have not only been able to increase awareness for veganism, climate change and animal rights but own and operate a successful business.

But they never viewed it as a purely capitalist or commercial venture, Nizam said, “and never will.”

Nizam said that outlook “sets us apart from other businesses” that might add vegan options simply to hike up the price of the meal.

Instead, veganism is a political, ethical and moral stance at the core of the business.

“Everything we do should be horror-free,” said Nizam. In caring about climate change, being politically involved and advocating for equality and justice, she said, it is “ethically right to want this for all living things.”

According to Nizam, there are not only benefits for the environment, but also for the mind, body and soul.

“People are realizing that it is what’s healthy,” Nizam said.

It’s a fitting metaphor for their little restaurant that started small and continues to grow.