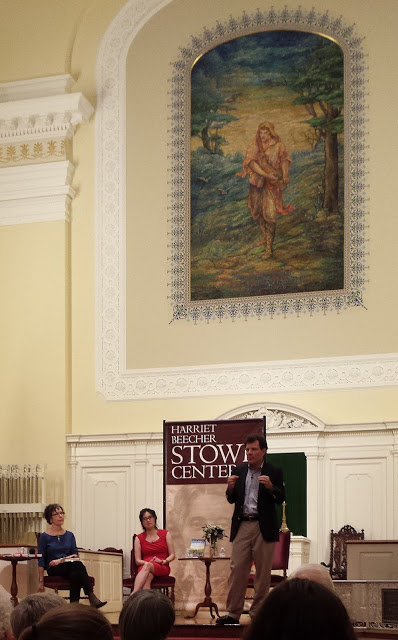 HARTFORD, Connecticut, U.S.A. – Empathy is one of the most important tools in combating social inequality, journalists Nicholas Kristof and Sheryl WuDunn said.

The husband and wife duo, who are co-authors of the 2014 book A Path Appears: Transforming Lives, Creating Opportunity and Half the Sky, published in 2009, spoke at a recent Harriet Beecher Stowe Center event. Both books provide insight into oppression, especially faced by women and girls, and ways people are making a difference in the world.

Kristof and WuDunn emphasized the importance of responding to the needs to others, and doing so immediately.

“When you intervene early, you have much more effective outcomes,” said WuDunn, speaking to the Stowe Center audience at the Immanuel Congregational Church. “The reason we’re not so effective is that we’re intervening too late.”

WuDunn explained that because of the rapid brain growth in children, it’s essential to intervene in early childhood.

“We have a number of programs that actually end up saving public money, and yet we don’t invest in them,” added Kristof, saying that there are programs that exist to help early intervention and address inequality, but the public doesn’t invest enough in them.

In the end, according to the couple, it all comes to whether or not people empathize enough to fight inequality and intervene.

“We’re all hardwired to a degree to have empathy,” said WuDunn, explaining that there are genetic components that we can cultivate to generate more empathy.

But the problem, as Kristof said, is that humans have what is known as an “empathy gap.”

“If you are affluent, then you’re insulated from need,” he said. “You might be intellectually aware of it, but you don’t confront it on a daily basis.”

By closing ourselves off to this need, he said, we demonstrate apathy and widen the empathy gap.

“When you’re willing to bridge that empathy gap you can have a remarkable impact,” said Kristof, who writes an influential column in The New York Times.

It’s why, he said, media is so important in addressing these issues. Television is particularly essential because it forces people to confront images of need and inequality. Unfortunately, the media isn’t utilized to its full potential when it comes to spreading awareness about issues like the wealth gap, according to Kristof.

“Historically I don’t think we’ve done a very good job of [fighting] poverty,” said Kristof. “And I don’t think it’s going to get any better. We have to try harder to tell these kinds of stories.”

Both journalists took the time to address important issues in the world, including the wealth gap, corruption, and unequal access to opportunities.

Kristof admitted that his examination of these issues gave him a reputation as the “Eeyore of the human race.” However, he himself sees it in a different way. Even when faced with awful situations, seeing the worst of humanity playing out in front of him, he said that it’s always accompanied by the best of humanity.

“Sure we’re capable of terrible things, but under extraordinary stresses you also see kindness.”

Progress, he said, was the motivation to keep going. The hope that these issues can be resolved is what keeps him going. So often, he said, people choose to do nothing because they don’t feel their actions will be enough.

But at the end of their talk, the journalists left the audience with the challenge to pick up the ball when they drop it, shining a light on important issues in the world.

Mugdha Gurram is a Senior Reporter for Youth Journalism International.