BRISTOL, Connecticut, U.S.A. — If you’ve been through the auditorium at Bristol Central High School lately, you might have seen some tumbling tumbleweed or caught a glimpse of some cowboys straight from the Old West. 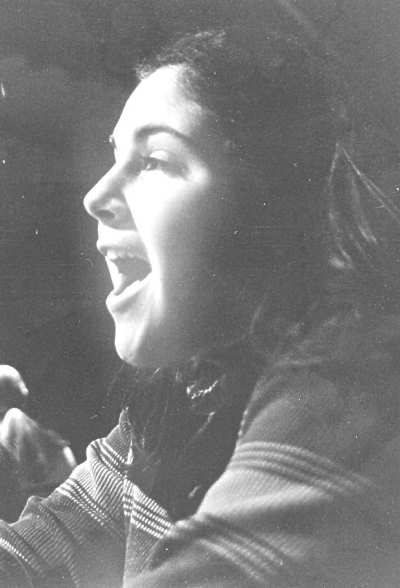 Hallucinations? No, it’s just the “Oklahoma!” fever going around as the big opening night performance draws ever closer.

“It’s great coming to a new school and being part of a cast that helps me build such great friendships,” says freshman Erika Tacchi about Bristol Central’s upcoming performance of “Oklahoma!” next month.

Footlights, Central’s performing arts group, is busy preparing for the play which centers around Curly (played by Matt Matrin), a good natured ranch hand; Laurey Williams (Crystal Bilodeau), the farmer’s daughter whom he loves; and the menacing Jud (Ben Whelan), who tries to come between them.

Set in the Oklahoma Territory in the early 1900s, “Oklahoma!” is an idealized view of a simpler time, and an upbeat, exciting version of frontier life in the Old West.

It is the first collaboration of the famous duo Rodgers & Hammerstein, and includes classics like “Oh what a Beautiful Morning,” “Kansas City,” and the title song “Oklahoma!”

The play, which runs for three shows from April 9 to 11, wasn’t at all easy to put together, according to cast members.

“You work and you work. You can’t just go to rehearsal and automatically expect to know your lines.” says junior Matt Martin.

The cast, which includes 42 students, puts in endless effort to make a flawless final product. Each actor is expected to put in 10 hours of rehearsal time every week for 10 weeks.

“I like being able to explore the characters with the smaller casts, but with the larger casts you get to see the more technical side of theater,” said director Jim Smith.

The large cast is a far cry from Central’s last play, which only called for 10 actors, but most feel the extra effort required to work with such a large cast is worth it.

Junior Meric Martin, who plays the cowboy Will, said, “I like it better with a larger cast because there’s more energy and more people to work off of.”

But then there are others who are just happy to have the opportunity to be in a play at all.

“I’d rather have a small cast because of the unity among the group. Also each actor has a bigger chance of being in the spotlight,” said freshman Erin Gauvin, who will make her debut with Footlights in “Oklahoma!”

“But that doesn’t mean that I’m not thrilled to be in a big cast like ‘Oklahoma!'” Gauvin added. “I am.”

On the other hand, there are several who will be graduating in a few months, making “Oklahoma!” their farewell performance.

Senior Crystal Bilodeau’s performance in “Oklahoma!” is her sixth play at Central. She said working with the school’s performing arts department over the years has been a privilege because the group is “very professional and you learn a lot.”

Actors said they like the diverse group involved in the spring musical.

“I love being in this play because there are so many people, especially underclassmen, that I get to know and work with that I wouldn’t get to know otherwise,” said senior Melanie Houle.

The actors all agree on one thing: they can’t wait for opening night.

“I could never imagine getting along so well with a group of people,” said technical manager Joel Rydel. “Everybody comes together to achieve one goal and although we’re all very different, it’s the greatest feeling when it’s done.”

Ticket costs are $9 for adults and $7 for students and seniors. They are on sale beginning March 15 at Ink Spot Printing ,43 Middle St. in Bristol, and in the BCHS lobby from 6 to 9 p.m. every Monday.