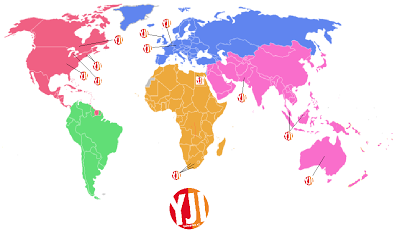 Robert Guthrie, a new YJI reporter in Scotland, took the initiative after our New Year’s Eve project to make this awesome world map.

This colorful map shows, with little YJI circle logos, all the places in the world where YJI students live who contributed to our first-ever New Year’s Eve coverage.

Regular blog readers will probably know that we offered up photos and sometimes stories about what was happening as 2010 faded away and 2011 emerged anew.

The project was something of a last minute idea, so we were thrilled to have five continents represented. We had contributions from 14 students in 10 countries: Australia, Malaysia, South Africa, Pakistan, Egypt, the Netherlands, Germany, Scotland, Canada and the United States.

The students were young men and women, some brand new to YJI and others practically old timers by now.

Most included a photo and many students offered some explanations of traditions practiced in their own family, culture or country.

Almost all showed happiness and hope. Only one, the piece from Egypt by YJI’s remarkable reporter Jessica Elsayed, had to address the terror and sorrow still with us in the new year, the horrific bombing of the Coptic church in Alexandria, where Jessica lives. If you haven’t read that one, don’t miss it.

All of those wonderful stories and photos are on this blog now. As you scroll down to see them (we’ve had a few other topics since then, of course) you might need to click where it says “older posts” to see the earliest ones.

I hope you enjoy this young and worldly view of the new year!