By Katie Lothrop
Junior Reporter
Youth Journalism International
GRAPEVINE, Texas, U.S.A. – At the
Mayborn Literary Nonfiction Conference, young writers meet authors of their
favorite books, listen to them as they tell their stories, share their methods
and answers questions about themselves or their work.

This year, writer Dale Maharidge and
photographer Michael S. Williamson, the authors of Someplace Like
America, a book about personal experiences during the “new Great
Depression,” led one of my favorite sessions.
Williamson took some of the most
amazing photos I’ve seen in my life – with an iPhone.

During their speech, Williamson
displayed pictures that captured the spirit of the people and their feelings
during the faction of a second he took to snap the shutter. I’d never seen any
photography like that.
Together, the men had gone on one
incredible journey to get their story. They rode freight trains and met people
with extremely interesting stories along the way. Most notably, they met a
group of homeless people whose freight car they had just happened to climb
into. They also met other people riding the trains seeking work in other parts
of the country. It was a riveting lecture.
Later in the weekend, the conference
held book signings where I met authors and chatted with them about their books. 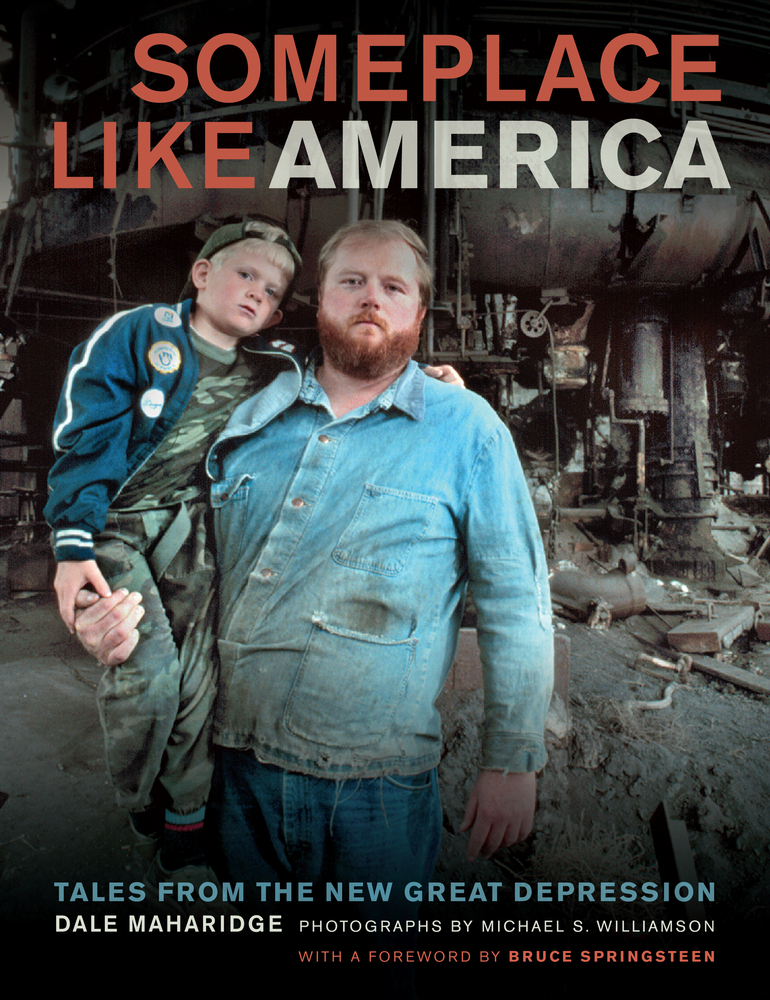 My mom and I were about to head back
when I saw Maharidge and Williamson sitting at one of the tables talking.
Before I left, I just knew I had to at least compliment Williamson on his
photos, even if I couldn’t talk with them about their writing and photography.
So I went for it.
Slapping my hands down on the table
I said, “Your photos are beautiful.”
That’s all I had planned to say
before leaving, since Williamson had been in the middle of a conversation.
Instead, after thanking me, he started an engrossing discussion about how he
had been able to take the photos.
One time while working at the The
Washington Post, Williamson was able to get pictures of a horse stuck
in a swimming pool by going to a neighbor and borrowing their ladder to look
over the fence. The police had barricaded the only entrance and would not
let any reporters or photographers through, yet still Michael got an amazing
photo for the newspaper.

After leaving to go check out the
books in the book store, I couldn’t help coming back with their book, Someplace
Like America, to get their signatures. Both the authors joked and
talked as they signed, but what I treasure most was what Maharidge wrote to me
in the book:
“Follow your passion with your
writing career – we can tell you have it.”
That’s the kind of inspiration I
find at Mayborn, which is put on by the University of North Texas. I attended
last year and enjoyed it so much, I wanted to come back again this year as a
Young Spur.
The Young Spurs are a group of 10
high school and community college students selected based on the biographies
they submitted to the Mayborn. Those chosen attend the conference for free and
take part in a writing workshop with author James McGrath Morris, whose newest
work is a biography of Joseph Pulitzer.

When all 10 of the Young Spurs
gather in a small conference room it’s a little nerve-racking, because we don’t
know anyone. Even I, as a second year, didn’t know any of the new Young
Spurs.


But as everyone started talking, we discovered we got along really
well, and each of us had our own opinions over the different biographies – ways
to improve our works and refine our writing skills.

During the conference we also went
to author discussions like the one with Maharidge and Williamson, where
speakers told us about the adventures they had while writing their books, and
tales of how they got the inspiration to write it. It was fascinating.

One Pulitzer Prize-winning writer,
Isabel Wilkerson, traveled across the country interviewing hundreds of people
to find the three perfect individuals whose stories would describe the three
massive migrations in the 1900s in her book The Warmth of Other Suns.

As a teenager, I have no idea where
my future lies. All I know is what I enjoy. I have goals, and dream colleges,
but it’s impossible to know whether I’ll achieve them or not.

I’m sure that as I’m reading Someplace
Like America, and in two years when I go on to college, and after college
as I start my writing career, I will look back to what Maharidge wrote for
encouragement.
Maharidge gave me something no one
else could have. He inspired me to dare to do big things, and dare to challenge
the world.