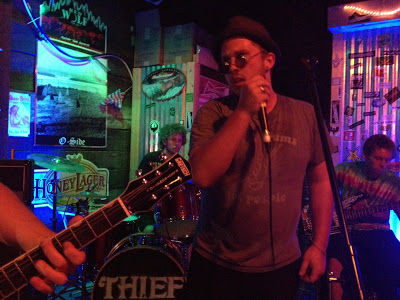 By Talon Bronson
Senior
Reporter
Youth Journalism International
PORTLAND,
Oregon, U.S.A – Everything comes to an end, and there are no exceptions.
Even
the sprawling madness of the Nevada landscape, with its dry spattering of trees
and lonesome stranded trailer parks, at some point halts. As far out as it
seems to stretch, at some point the land becomes green, the tide turns, and
Nevada is no more.

You
and I are the same, as far as our lives seem to stretch, at some point we’ve
just reached too far, and whether it is with a snap or a weak limp, we end.
It
was the same for the first A Thief At Heart tour. As long as it seemed to go on,
as far out as the horizon that bore the promise of home seemed to be, with a
weak limp, it was all over. We were home.
I
lay in bed, drained, and stared at the ceiling. I slept. I paced the house, and
thought back over it all, about Nevada, Tahoe, LA and San Francisco. I looked
at the pictures and tried to recall it all.

I
asked myself whether I had just had the best three weeks of my life, or the
worst, and I still don’t have an answer, but it is all done and nothing else
really matters anyway.
Whether
the last month has been a blessing, or a curse, now it is just a matter of time
till it is nothing more than a memory.
I
am happy to be home, for different reasons, but there is no denying I am happy.
I missed my friends, my acoustic guitar, and the trees. I missed my family. I’m
happy to have my world back.
And,
I’m happy we made it back at all.
Three
days before our return to the Northwest we were in LA, rolling through a city
made of dreams, or so they tell you on TV. A club called the Amplyfi had booked
us, a little door down a back alley, with magazine covers and records hanging
from the walls inside.
We
had gotten to LA early, so we set up shop at Huntington Beach, playing the
roles of out of town bums, beach inspectors and amateur wave riders. The water
was warm, and the sun rose high, and the city craned up, touching the
smog-riddled sky. I let the sand bake my skin, and the water cleanse it, and
when I was hungry I ate tacos, because if there is one redemptive quality to
the excessive nature of southern LA, it would be the taco.
LA
has the best tacos.
I
prowled that sprawling city and tried my best to
check every crevice and crack. Not out of love for the place, but curiosity,
for so many people of caliber over the ages have seen it as a beacon of
America, the headlights in some fashion, the home of the American dream. Yet
after a day of wandering that strange land, I wondered how it could be a
suitable home for anything. LA is sparse in a fashion that I can’t quite
explain, an emptiness despite its size and breadth that it is almost
unbelievable.

While
the city stretches high, and lays out wide, its girth is akin to the bloated
stomach of the figurehead of America. It is a city of ghosts: ghosts of the
idealists, and the artists, and the rock stars. While once the land overflowed
with contributors to the culture of America, now LA clings to what remains – a
shell of the past dreams.


Don’t miss any of Talon Bronson’s Rock ‘n Roll Road series. Click on the links below to read any of the first three parts:


Part One:
Long Days In An Old Van, Late Night in Dingy Bars –
And No Sleep
Part Two:
Singing For The Desert And Its Awful Beauty
Part Three:
From Paradise To The Devil’s Backyard 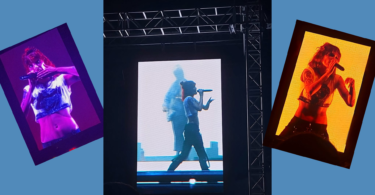