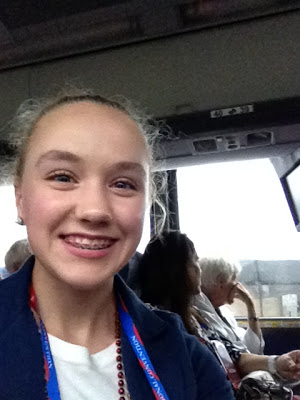 She’s attending the Republican National Convention in Tampa, Florida. It’s her first time at a national convention, and she says she’s “very excited to see what’s in store.”
The convention will open Monday, but immediately adjourn for the day because of the oncoming hurricane. It is scheduled to open again on Tuesday. Allie’s mom is an alternate delegate from Minnesota.
During the convention, the party is expected to select former Massachusetts Gov. Mitt Romney as its candidate for U.S. president.
Please check back for Alli’s reports.

YJI
Reporter Alli Hall, 15, of Duluth, Minnesota, is attending the Republican
National Convention with her mom, who is an alternate from Minnesota. Read all
of her dispatches and see all the photos at these links:
Part
One: The Grand Old Party Is Underway in Florida
Part
Two: Candidates, Cupcakes Sweeten Convention
Part
Three: Republican Convention: A Kid’s Point of View
Part
Four: Romney Speech Caps
Unforgettable Week