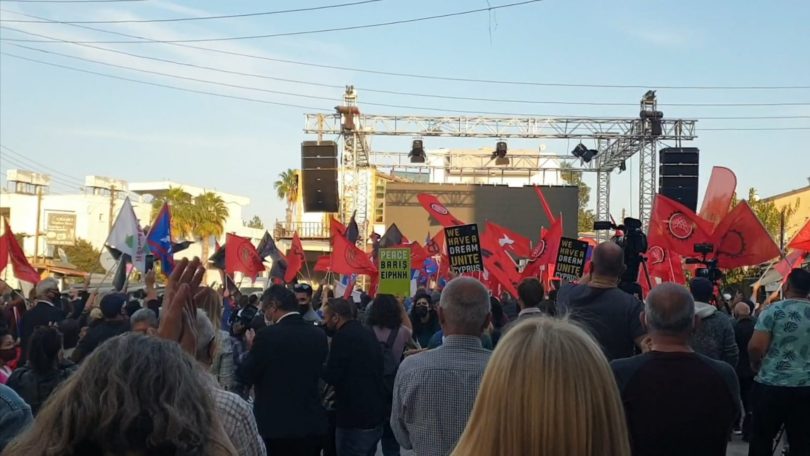 People in Cyprus gathered in NIcosia Saturday and waved flags as a Turkish rendition of "Bella Ciao" played. (Erin Timur/YJI)

Nicosia, CYPRUS – Hundreds of Turkish and Greek Cypriots took to the streets of Nicosia on Saturday at a rally aimed at raising awareness of economic and political grievances.

Organized by the platform Bu Memleket Bizim, which means This Homeland is Ours, the event featured Güven Bengihan, who is the chairman of the Cyprus Turkish Civil Servants Trade Union.

The Turkish Republic of Northern Cyprus, the part of the island of Cyprus that is under Turkish rule, is “facing worse hardships than ever before,” said Bengihan, who began his remarks addressing the economy.

Bengihan referenced the ever-worsening exchange rate, rise in the prices of all goods, employment problems, the borders between the Turkish-controlled area and Republic of Cyprus being temporarily closed and a growing disappointment with Ersin Tatar, who is president of the Turkish Republic of Northern Cyprus.

Regarding the deteriorating economy, Bengihan said the government was “taking away with a ladle what it gives with a spoon” a statement made in light of the spike in the price of goods that had been accompanied with a minuscule rise in minimum wage.

With the cost of living rising every day, this statement incited cheers and applause from the crowd. They continued when, in a clear dig at Tatar’s willingness to turn a blind eye, Bengihan said, “We cannot stay silent in the face of our people’s impoverishment.”

Tatar, who is backed by Turkey, was also identified as one of the key problems in Bengihan’s speech where he referred to his homeland as a puppet state.

Reciting a popular slogan, Bengihan said, “This homeland is ours, let us govern it.”

As a perfect segue into a recent controversy surrounding the closing of one of the many checkpoints dotted across the country, Bengihan spoke on the Ledra Street Crossing point.

There the iron bars fencing off either side of the checkpoint – supposedly closed down due to renovations – are a grim sight and understandable cause for concern in both communities.

Bengihan acknowledged this, as applause and cheers rang out in the crowd and the popular slogan, ‘Peace in Cyprus cannot be prevented’ reverberated off the packed sidewalk.

In speaking to the crowd, Bengihan made his case for true democracy.

“From elections for president to party chairpersons, all elections have been tampered with. We are here to oppose the disregarding of our will, to protect our right to govern ourselves and to ensure democracy in real terms in our country,” Bengihan said.

Bengihan then accused the current administration of acting only on personal whims and with vested interest, attributing the allocation of jobs within the government as being handed out “not according to merit but party.”

The labor leader continued his well-received speech, saying the Turkish Republic of Northern Cyprus had been subjected to “unmitigated chaos” for a whole year under the rule of the National Unity Party. It “stole a year of our people’s lives,” he said, adding, “The experiences have become a dark stain in our democracy’s name.”

Bengihan called out leaders of both the Turkish Republic of Northern Cyprus and the Republic of Cyprus on what he said was their fake willingness to work on reunification – something that has been on the center-left and left’s political agenda for decades.

Bengihan went on to address other issues facing the community in the Turkish Republic of Northern Cyprus such as education, unemployment and the mishandling of the pandemic.

Before the rally ended, the musical group Sol Anahtarı played a Turkish rendition of the Italian protest classic, “Bella Ciao.”

For the Turkish Cypriot community – who’ve seen the crowds grow thinner at protests, marches and rallies as the years go on – all that’s left is hope that their furious cries for help will soon become a catalyst for necessary change.

Erin Timur is a Junior Reporter with Youth Journalism International.