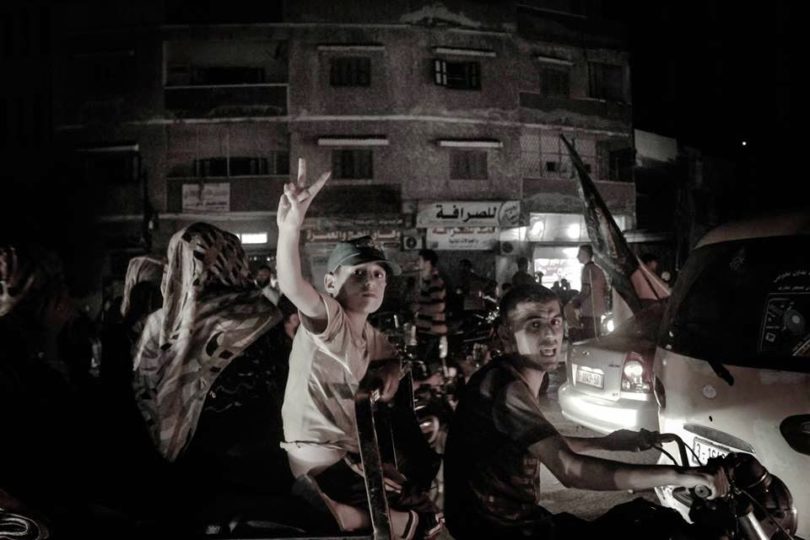 KHANYOUNIS, Gaza – The poet Rumi wrote that the wound is the place where the Light enters. If that is so, Gaza today is flooded with light.

The cease-fire came at 7 p.m. Jerusalem time Tuesday. It was the moment where life gave a glimpse of a smile to the more than 1.5 million people in Gaza, causing them to live every single feeling all mixed up in one heart. 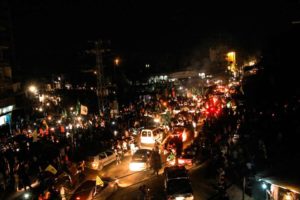 After officials announced the longterm cease-fire with Israel, Gazans took to the streets to celebrate. Above, a crowd gathered on Abu Hmid street in Khanyounis on Tuesday night. (Salama S. Salama/YJI)

But I can only speak for myself. How do I see it?

It was disturbingly surprising how we in Gaza even had the thought of celebrating after more than 2,200 souls were snatched away with no mercy in seven terrible weeks of war. And thousands more are still living the most arduous life imaginable in one of the cruelest diasporas in history.

I couldn’t even smile at that moment. I was joyous, yet even more sad.  I talked to random people about how they were feeling after this massacre, and all I got were vague answers that told me nothing but how confused their emtions were.

I could see their sorrow in one eye and happiness in the other. But that happiness wasn’t from an end to the colossal calamity we had endured. Instead, it was a salute to all those innocents who lost their lives for the sake of dignity and freedom. 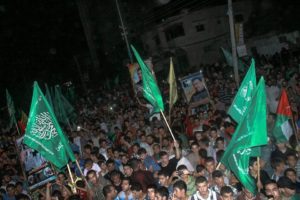 Crowds gather in celebration in Khanyounis on Tuesday, with some people waving the green flag of Hamas.

They die for the sake of tomorrow and the day after tomorrow. And most importantly, they live for today. 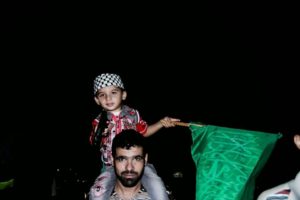 Salama S. Salama / youthjournalism.org
A father, Yassir Fayad of Khanyounis, carries his son  Khaled on his shoulders as they take part in the celebration of the cease-fire on Tuesday night. Khaled is holding a green Hamas banner in one hand and a toy gun in the other. Fayad said everyone else was out celebrating victory, so he went, too. But he said, sadly, “Another two victories and we will vanish.” (Salama S. Salama/YJI)

Once you get in a storm, you never come out the same person. Gaza might have seen the worst, but Gaza said, and will always say, “NOT TODAY,” to the god of death. And for that, I shall smile.

Ahmad Zaqout is a Reporter for Youth Journalism International.

Children peer out the window of a bus on the way to a celebration in Al-Saraya, the downtown section of Gaza City on Tuesday. (Salama S. Salama/YJI)