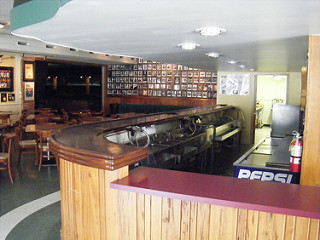 Inside the Surf Ballroom in Clear Lake, Iowa, the venue that hosted the last concert by rock and roll legend Buddy Holly. (YJI)

Clear Lake, Iowa, U.S.A. – This 60th anniversary of Holly’s death is an opportunity to appreciate all that he gave us, and to mourn all the future achievement lost on a cold February night in Iowa, an occasion Don McLean dubbed “The Day the Music Died.”

There is a more traditional memorial in the field outside of town where Holly’s plane went down, but the Surf Ballroom, where Holly took the stage for the final time, is the true gem of the community.

Largely preserved as it appeared in 1959, the Surf Ballroom is simultaneously a shrine to Holly, a museum, and an operational performance space.

Quirky and interesting, it provides a glimpse into an era when rock stars played in ballrooms and high school gyms, instead of arenas and stadiums.

Holly died in a plane crash after the Feb. 3, 1959 show where he performed with other early rock and roll stars, including two who died with him, Ritchie Valens and The Big Bopper.

A musical genius not just on account of his own chart-topping hits, but also due to his incredible influence over generations of later artists, including The Beatles, Holly revolutionized music, and his songs and innovations are still familiar today.

And he did all of this before dying at age 22.

Even Alexander the Great, cited for millennia as an example of great achievement during a brief life, had done less than Holly did during his first 22 years.

I turned 23 last year and, for the most part, I feel as if I’m still young. I’m frequently the youngest person in the room, and I have “so much potential,” at least according to my parents and grandparents.

You see, 60 years ago, one of my favorite musicians died.

Kiernan Majerus-Collins is a Senior Correspondent for Youth Journalism International.