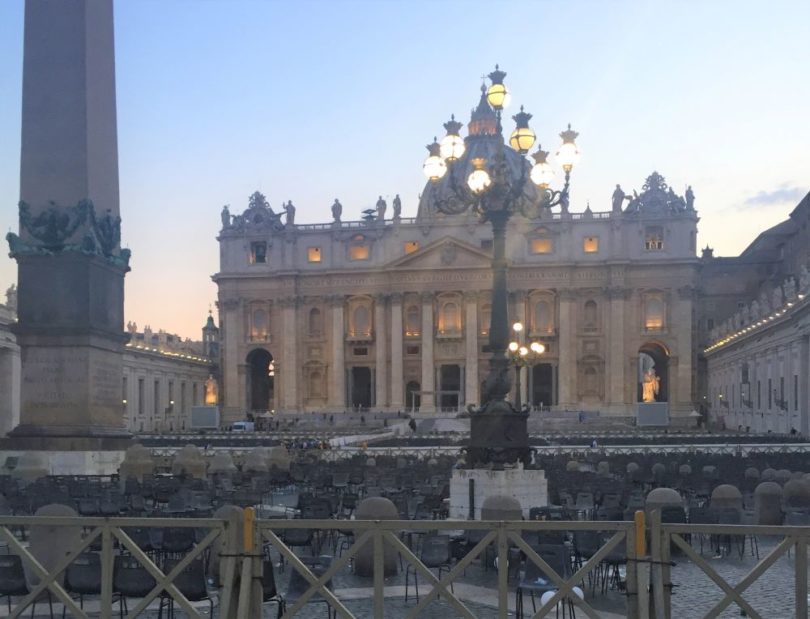 St. Peter's Square at the Vatican in Rome. (Annalena Stache/YJI)

This is disappointing to many, especially since Pope Francis previously seemed supportive of the LGBTQ+ community, saying that members of it were as accepted, loved, and valid as all other Christians.

Catholic priests have been known to bless not just heterosexual couples, but objects, even guns.

Cardinal Rainer Maria Woelki of Cologne, Germany, who has been in the news a lot lately due to accusations of covering up cases of sexual assault in the church, is one of the rather conservative priests who support the church’s recent decision. But he was not always like this.

Before he became a cardinal – a high ranking member of the clergy – Woelki was actually known for being liberal and vocally supporting the LGBTQ+ community. As a bishop, he was one of the church leaders who made members of the church believe that a change might be possible.

But his attitude changed completely as he moved up in rank.

It is widely known that the church is conservative, homophobic and against abortion. A lesser known fact might be that not everyone in the church is like that.

But it seems the higher one’s rank within the church, the more conservative one has to be.

That’s why a liberal pope was something so unheard of, why he was such a big hope. That’s also why his sudden change now is so disappointing.

In Germany, there are liberal bishops, like Bishop Peter Kohlgraf in Mainz.

Kohlgraf wants the church to change its general mindset, especially when it comes to gay people. In an interview with Mannschaft Magazin, he said that it is not the church’s intention to discriminate.

Kohlgraf also mentioned that he could imagine priests not living celibately, even though he chooses to and, he said, it is also the lifestyle Jesus chose for himself. But he also said in the same interview that he cannot see anything good about the homosexual lifestyle.

There are more German bishops who are deemed liberal and “gay-friendly,” though none of them seem to be able to say directly that they want marriage equality to be possible. They are often vague about what they say, like they are trying to fit into the general expectation of what a clergyman should be like.

Many others, including Catholics who are not church officials, scouting organizations and politician Julia Klöckner, the German minister for agricultural economics who belongs to the Christian Democratic Union – have clearly positioned themselves against the church’s homophobic stand.

In Germany, it has been legal for LGBTQ+ couples to get married since 2017. It took until then because the largest political party at that time, the Christian Democratic Union, insisted for a long time that marriage could only be between a man and a woman. Eventually, the party gave in.

It was a long process, but this legislation gave many people hope. The majority, even the Christian Democratic Union, finally voted for marriage equality.

With the church, it seems different. It has already been a long process, but no real change seems possible.

There is hope, of course. Many church officials stand for LGBTQ+ rights and there are priests who accept people of all genders and sexualities. Some Christian organizations are outwardly liberal, but it never seems to be enough.

The church is so far behind, it seems as though it will not be able to catch up. Women got the right to vote in 1918 in Germany, but they still aren’t allowed to become Catholic priests.

The church is sexist and still discriminates against women, so it seems only natural that it is not ready to accept the full spectrum of people, sexualities and genders that make up the LGBTQ+ community. Even when queer people are mentioned, they are only called “homosexuals.”

I don’t know how long it will take for the church to realize that there’s more to it – that we, the people who aren’t heterosexual white men, deserve the same rights as they have.

They preach that we’re all children of God and all made in God’s image, but then they vote against our rights.

While that is not surprising at this point, it still hurts.