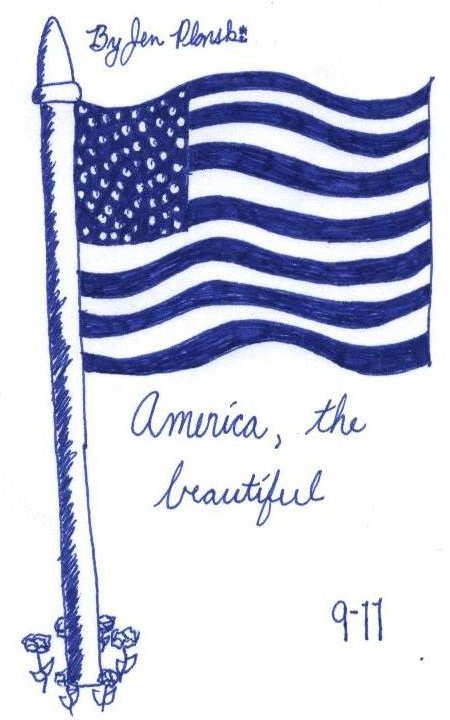 I see the first fire starting in one of the towers — a live picture.

It didn’t sink into me. A plane crashed. Maybe I’m just such a pacifist that it didn’t even occur to me it was a hijacking.

Ii just thought it was kinda ironic that it crashed into such an important building.

9:30 a.m. — At my 300 student lecture stats class. Our teacher tells us about it, but wants to continue teaching so we don’t fall behind.

11 a.m. — At my public speaking class, students were talking about it before class starts.

One student lived in New York City this summer and said he had a beautiful view of the twin towers and is sad they are not there anymore.

Then I hear for the first time that an American Airlines plane crashed.

My mom and dad are flying American today to Las Vegas. But my classmates say the flight was going to Los Angeles.

Our teacher comes in, untypically late, and tells us she’s too stressed to teach. She, cancels class.

Guys in my class say they may not be there Thursday because they’ll probably be called to fight in World War III.

I so want to be with my loved ones now.

Immediately I call my parents.

There’s.no answer at home. But my dad is in his office. They didn’t leave and all flights are cancelled.

Dad says mom is still sleeping after working third shift last night, all packed and ready to go to Vegas, oblivious to the country literally collapsing around her.

I go to the big TV in the international lounge, where I work. of course everyone is watching it.

It’s a great time to be an afghan and Muslim!

Mark, the director of the international center tells me it must have something to do with the assassination of Masood — retaliation.

President Bush reads from something someone wrote in a “taped speech.” Why does he read it? This isn’t public speaking class.Impromptu, learn it, Mr. Leader.

Anyway, Bush’s idiocy is the least of problems right.

Then he says the Hartford Courant wants to interview Middle Eastern University of Connecticut students, but he will not allow it.

I lay on the couch, continue to watch TV, then fall asleep. I wake up and this cheerful girls says “I need to ask you a couple of questions. I’m from the Daily Campus” (that’s UConn’s student newspaper).

“Are you an international student?” “No,” I say.

She’s watching the footage of the collapse of the towers, which I’ve already seen at least 25 times at that point. She covers her eyes and shrieks.

Now I’m waking from my nap, it’s almost 2 in the afternoon,and the international center has cleared out. Classes are cancelled for sure and activities postponed.

Ii come up to my dorm, check my email — my coed service fraternity meeting tonight (Alpha Phi Omega) is cancelled and we are working on emergency blood drives and a candlelight vigil along with the student government.

One comment from a firefighter: “The world is truly an evil place.”

If it is the work of Bin Laden, which is just speculation at this point, I am truly ashamed and confused.

I don’t understand how mass killing of innocent people can be great for Islam. I just don’t get it.