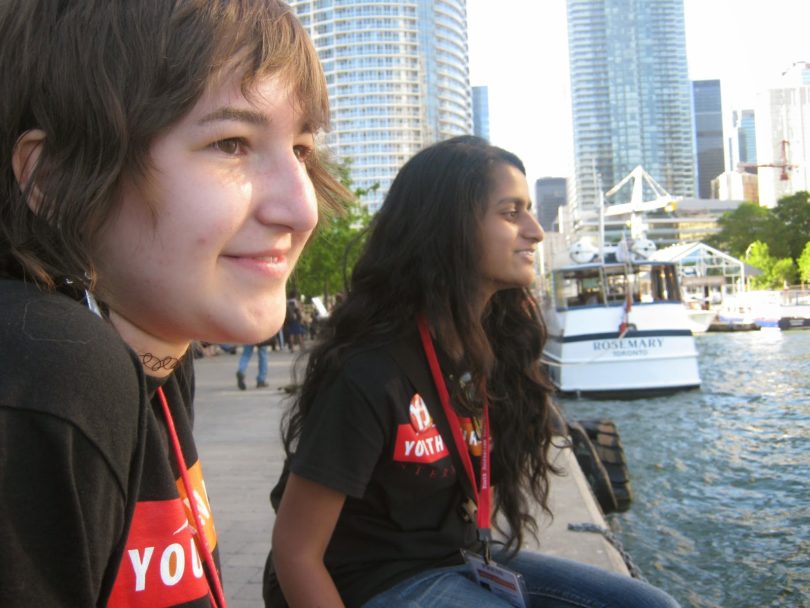 By Mugdha Gurram
Junior Reporter
Youth Journalism International
TORONTO, Canada  – Toronto is a large and beautiful city, and
we were welcomed kindly by the people we met there, although the collies with
us may have had a part in that.
Even though we spent most of the day at
the Harbourfront, we did get to see a lot of Toronto while walking around the
city, guided by our friends who live here.
Toronto has a lot of diversity, which we could see in its vast population in the streets.

We saw people of all different professions, religions and ethnicities in the crowds around us.
Although we didn’t go to the WorldPride
festival going on in Toronto, we were happy to see Toronto’s support for its
gay community in the flags that were hung up in shop windows around the city.
We also saw the various acts of several
street performers. There were jugglers, fire-eaters, instrumentalists,
magicians; you name it and Toronto had it. Many of these street performers drew
quite the crowd, inspiring ooh’s and aah’s from their audience.
As visitors from a suburban town, we
enjoyed the city’s pretty skyline. It’s even better at night, when all the
buildings are lit up. Perhaps the most beautiful part of all the skyline is the
CN Tower with its changing lights.
The architecture of the buildings was
beautiful, and at least in some cases, more complex and quite different from
what we see in our Connecticut town.
Along with having beautiful buildings, Toronto
also has enormous ones. Standing next to the skyscrapers and looking up to
their roofs makes me feel miniscule, especially since I’m only five-foot-two.
Toronto is an amazing city, and
although I was sad to leave it behind, I got to take a lot of great memories
with me.