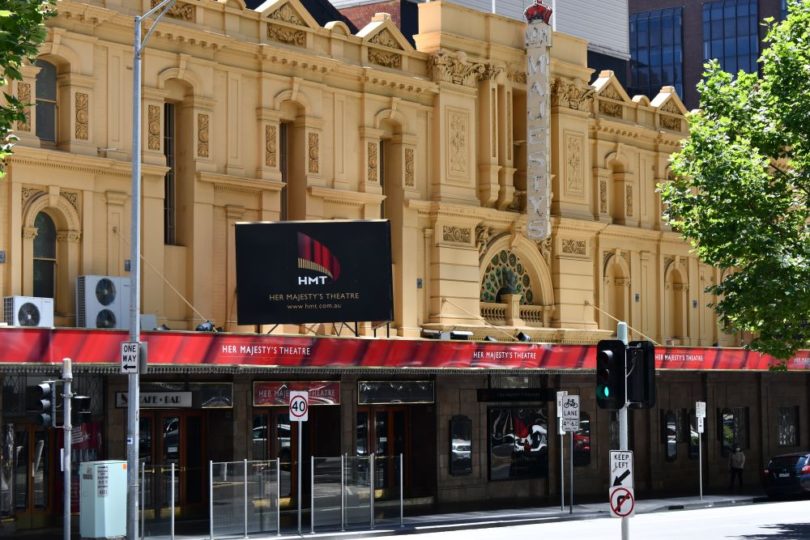 Her Majesty’s Theatre is a major theater in the heart of Melbourne. (Alyce Collett/YJI)

Melbourne, AUSTRALIA – While many businesses in Melbourne were still able to operate during the pandemic lockdowns in 2020 – and are now open to patrons – it’s been a different story for the city’s once-vibrant arts scene.

For many months now, Melbourne’s theaters have been shut, not able to make any income for the thousands of employees who rely on their shows to make a living.

Although some of the shows in the bigger theatres in Melbourne have set a date for their return, it is still quite an uncertain road ahead.

During the pandemic, the Australian federal government introduced Jobkeeper, a policy in response to businesses having to shut down and people losing income. It is a wage subsidy program designed to give many people a source of income while their workplace can’t open for business.

“The JobKeeper Payment is a payment made to eligible businesses and not-for-profits affected by the Coronavirus to support them in retaining employees,” reads the description of the program on the Australian Treasury site. Under the Jobkeeper initiative, the government reimburses employers a certain amount per eligible employee that may cover or partially subsidize the employee’s income.

Although this payment has been a lifesaver for many people, the rules of the program made many workers in the arts sector ineligible for the scheme, leaving them in a financially precarious situation.

So many people in the arts industry were not eligible for Jobkeeper because the Arts is for the most part a gig economy, with some rare exceptions, said Beng Oh, a freelance theater director based in Melbourne.

“Writers, directors, actors, musicians, dancers, designers, technicians, crew, etc are treated as independent contractors. There has been little or no investment in creating and maintaining ensembles of the kind you see in Europe,” said Oh. “Successive governments have chosen to invest in buildings and arts administrators rather than artists. The JobKeeper eligibility test highlighted the unequal and insecure nature of the employment relationship between practitioners and companies.”

“It’s kind of bizarre the way Jobkeeper has been available to so many industries but not the academic and education sector and not the artistic sector,” said Miller. “Those are the things in times like this [that] sustain society, and so it’s been a bit depressing.”

Miller continued, “I think there’s always been this suspicion that the current political climate hasn’t valued the arts enough, and I think it’s been a bit depressing to see that during this pandemic that’s been made quite explicit by the fact that there wasn’t opportunities.”

When asked what he would say to the prime minister, treasurer or any other relevant minister about the situation people in the arts are in, Oh said the funding reflects the importance the government places on the arts.

“You lose what you do not value,” Oh said. “If you truly believe that the arts makes for a richer and more meaningful life, then more needs to be done. There are a lot of theaters and companies that will close without more support.”

When asked the same question, Miller had some stark warnings for the relevant ministers.
“This [the economic decisions politicians are making today] puts a generation of artists at risk,” said Miller. “You may not see that impact tomorrow, but we’re going to feel it for years to come. That’s going to be the tragedy.”

Oh does believe the arts industry will recover to where it was pre-covid, but it won’t be for a while.

“The arts itself will endure and paradoxically can thrive during hard times. The arts industry however will recover in lock-step with the economy.  It took 14 years for our jobless rate to recover after our last recession in 1991 and this is a much bigger hit,” he said.

“To recover, the arts industry needs to improve on where we were pre-covid,” Oh said. “It’s a daunting task but not impossible if the will is there on the part of federal and state governments – and therein lies the catch.”

Miller said she is worried about the financial survival of venues that for so long have had to remain viable without any shows to bring in revenue. She said she believes the arts industry will recover, but said it depends on when live performances can return.