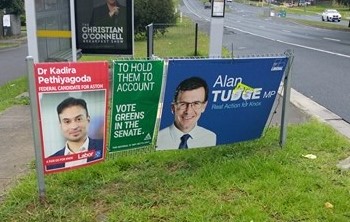 Melbourne, AUSTRALIA – It’s election time again here in the land they call ‘Down Under.’ With the deteriorating nature of politics in this country, Australians are well and truly ready for an election to shakeup the state of things in Canberra.

Last year was tumultuous for Australian Federal politics. From a citizenship crisis to a leadership crisis, 2018 was no ordinary year.

Ever since, the government has been trying to save face by making sure it does everything necessary to not lose a vote on the floor of Parliament.

Despite their best efforts, they did lose some votes, including a loss on the Medivac Bill, which allows for ill refugees to be brought to Australia for medical treatment.

Despite reassurances from supporters of the bill, the government went on the attack, outlaying how much of a disaster it was for national security and how it would re-start the people smuggling trade.

The government even took the extraordinary step of reopening the Christmas Island detention center, which had been shut down in 2018. Since 2013, the government’s policy was that asylum seekers arriving by boat were taken to an offshore detention center and never allowed to resettle in Australia.

There are three big players when it comes to this year’s election: The Liberal/National Coalition, The Labor Party and the Australian Greens. Right from the get-go, the consensus has been that this is Labor’s election to lose. The Labor Party has been in such strife lately that there is an expectation that they will lose a lot of seats – the exact number remains to be seen.

One of the big negatives of the campaign, at least from my perspective, has been the advertisements from the two major parties (Liberal/National and Labor).

To Labor’s credit, they have run a few positive ads, but the Liberal/National Coalition has run a higher percentage of negative ads. Their tag line is ‘Labor – the Bill Australia can’t afford’ and the ad is about how Labor supposedly is not good with money. While bearing in mind that the fact that the Labor leader’s name is Bill Shorten makes this a clever play on words, it does not take away from the fact that there is nothing positive about the ad.

The Liberal/National Coalition has run one positive ad, but it appears to be only on social media at present, and their negative ad is having a much wider reach.

The Greens’ approach this campaign is in stark contrast to the two major parties.

Their strategy seems to be to target certain seats, like a couple in suburban Melbourne, where they know they have a chance, unlike the major parties which can target all seats. In both of those places in greater Melbourne, the Greens need to change fewer than 5,000 votes to get their candidate elected.

The election is Saturday, May 18.