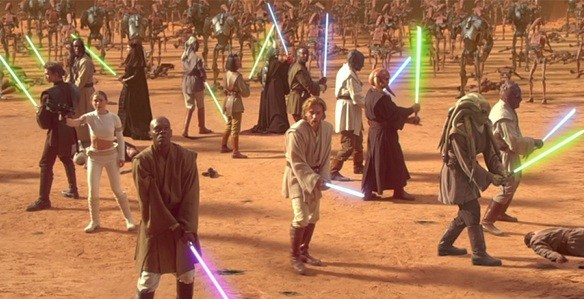 SCARBOROUGH, Ontario, Canada — George Lucas is back with the sequel to Star Wars Episode 1: The Phantom Menace and his remake is more spectacular than ever. This is the must-see movie of the summer.

With an unforgettable cast intertwined with an intriguing story line, Episode 2: Attack the Clones, the movie brought many to the theaters to behold a marvelous creation.

The commotion rose as the crowds rushed into box offices as the much-anticipated movie was released.

Once again, the Jedis embarked on their quest to defeat evil forces.

The astounding action and special effects left viewers in awe. The views of large cities, aliens and hundreds of clones marching in perfect order into a large spaceship were exceptional.

I was overcome with amazement as my excitement grew when I witnessed Yoda (Frank Oz) use his great wisdom, self-poise and courage to battle the dark forces using the well-known, powerful, green light saber.

My heart was captured as I watched the love between Anakin and Padme (Natalie Portman) blossom.

I truly believe this movie is one of the greatest sagas of all time.

Lucas has never failed to come through for his fans in retelling the epic journey of the Jedis through many generations.

Star Wars is, and always will be, a marvel that has already left its mark in the entertainment business.

Nasra Aidarus is a Reporter for Youth Journalism International.