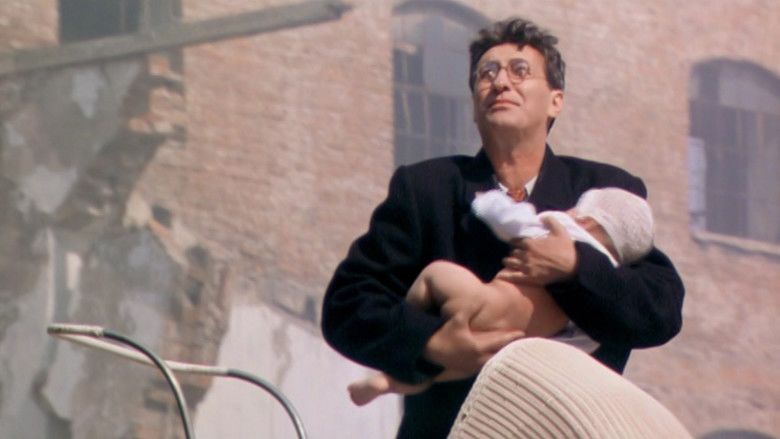 LONDON — The best film of this year is not a huge, big budget, big news blockbuster with an A-list star at the helm.

It is a small, low budget film, shown in only a smattering of cinemas, with one Oscar nomination to its name, and subtitles!

It was, of course, Divided We Fall, the latest film from a phenomenally talented veteran Czech director, Jan Hrebejk.

In the cinema last night, I was not the only spellbound viewer, but, as far as I know, I was the only one there expecting to write a review the next day.

Telling the story of wartime Czechoslovakia , this sad and often funny film followed the lives of a once prosperous Jewish family before it switches perspectives, abruptly, to concentrate on the lives of their friends and neighbours.

This is because the original family loses its interesting angle when they disappear to Poland, in the oncoming panic that sets in as the war, and the invading Nazis, begin to shape the lives of all those who stand in its way.

The first scene is slightly blurred, and confusing, as if you are sitting underwater and looking up at a scene playing itself out, above the surface.

In hindsight, however, this opening scene is perhaps one of the best beginnings to a film which I have ever seen.

As three friends drive about the countryside, halting occasionally for a toilet stop and the odd practical joke, neither we nor they realize that war is advancing on them, and that it will tear this friendship apart.

The imagery which is used and the actions and laughter of the characters evoke a sense of happiness, which was soon erased by horror, which we all felt as the film fast-forwarded two years and we saw the characters who had seemed so happy, only a few moments ago, having their lives wrecked by the German invasion of their country.

The most interesting of all the characters involved in the events at the center of the story is the principle hero.

Though this film has many heroes, no matter how unlikely, none are squinted at through an unforgiving lens so mercilessly as the character of Josef Cizek, who interestingly develops as an anti-hero who becomes a semi-hero when he takes in a Jewish fugitive (the son of his previous employer) and joins the Nazi invaders in a battle against the resistance in an effort to keep his stowaway a secret.

All the characters are social outcasts of one form or another.

Cizek is an unemployed man who likes to keep to himself, while his wife is a young woman, married to a man twice her age and, as yet, she has no children, even though the length of their marriage has been considerable.

The young Jewish man has nothing against him, except for a lack of family after their murders at the hands of the Nazis in Poland , and his own ongoing faith.

The final main character is a Nazi collaborator, who is married to a German, and is in love with our hero’s wife.

The eventual conquering of the enemy by the good guys is dampened by the pathetic situation in which the main character who depicts the ‘bad guys’ is in by the time he is finally beaten down.

His mental health weakens as a result of the tragedies which befall him, and this leads to an embarrassing situation when he decides to stay with the Cizek family.

In their haste to disguise their hidden friend and to get the Nazi commander from discovering their subterfuge, they make a mistake which results in an embarrassing situation for all.

However, by the end, all is resolved, and the hidden prisoner in the loft space is able to come into the light once again.

The arrival of the “Cizek” baby causes many a man to become an unlikely hero, and the final scene, which pays homage to all those who lost their lives in the Second World War, is a touching though unsentimental scene.

By the time I left the cinema, tears were rolling down my cheeks — and down the cheeks of many others who were leaving at the same time.

This film is beautifully crafted, unsentimental and evocative. It brims with laughter and sadness. And, finally, it sticks in your mind forever as one of the best war movies of the last few years.

Cass Lloyd Perrin is a Reporter for Youth Journalism International.