EAST HADDAM, Connecticut, U.S.A. – It’s hard to try and fit the magic of Mark Twain’s The Adventures of Huckleberry Finn onto a stage. Give them credit for trying.
By any other standard, this show at the historic Goodspeed Opera House would be a smash hit, with loveable characters, good music, some great actors and first-class scenery.
Compare it to the book, though, and the musical comes up well short. And not length-wise. The show was two and a half hours and Huck, the main character, still winds up summarizing most of the story. Large chunks of the book were left out. 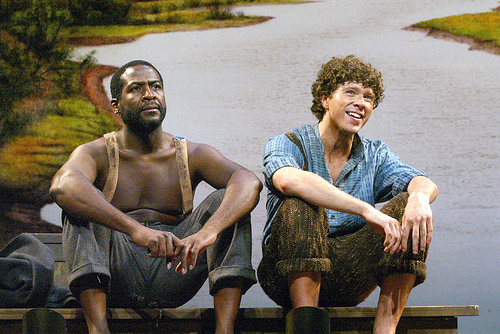 The musical stars Huck Finn (Will Reynolds), a 14-year-old boy whose father drinks and can’t take care of him.
He fakes his own death and is heading out on an adventure when he finds another runaway, Jim (Russell Joel Brown), a slave from his town who is seeking freedom.
Together they head down the Mississippi on a raft, hoping to join the Ohio River and get to the free states where Jim can earn money to buy his family.
They miss the Ohio in a patch of fog and have no choice but to continue south.
They meet The King (Ed Dixon) and The Duke (John Bolton), two over-the-top Midwestern con men who really don’t live up to the book-inspired expectations. The plot is funny, but the actors could have hammed it up a bit more. Maybe they had an off night.
A basic problem with the show itself is that it spends all too much time on the clever antics of The King and The Duke, while ignoring much of the novel.
Tom Sawyer appears to save it at the end, but again spectacular acting and music is foiled by time management.
Tom’s grand plan for saving Jim at the end of the book is a feisty ending, but the musical skims over it and spends too much time with Jim and Huck talking afterwards.
While the acting from Huck showed genius and honesty, and Jim does a good job with his critical part, the talking leaves the brilliant show with an ending as exciting as grammar class.
The show runs through November 30, 2008 at the Goodspeed Opera House. For a complete schedule and tickets, contact the box office at (860) 873-8668.

Kiernan Majerus-Collins is a Reporter for Youth Journalism International.