WEST HARTFORD, Connecticut, U.S.A. – Every Tuesday night for years, the protégées have come to King Philip Middle School to learn the refined art of jazz improvisation from the masters.
The protégées are middle school band students, eager to learn.
The masters? Talented teenaged musicians from the Hall High Concert Jazz Band, a group The New York Times reported in 2001 was “regarded as one of the best high school jazz ensembles in the nation.”
The high school students who teach the extracurricular class are volunteers giving back to a program that helped them out, according to King Phillip band director Joe Ganci, who has supervised the class for more than 15 years. 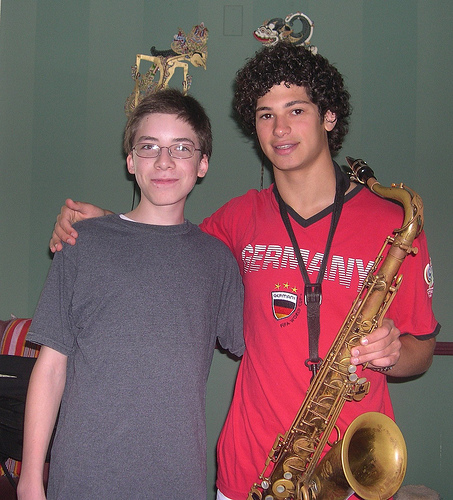 “Every kid that taught the class took it,” said Ganci. He said the students pass the skills and tradition “from one generation to the next.”
It works.
Freshman Sam Maidman is a new alto sax player in the Hall High Jazz Band. He’s also a graduate of the improv class.
Maidman said the class “definitely helped him out” in his quest to get into the revered high school jazz program.
“It teaches you how to improvise,” said Maidman.
Sam Moffett, a freshman at Conard High School across town, is another graduate of the improv class – and he’s a new tenor saxophone player in his school jazz band.
Moffett also said that the class really helped him with his improvising.
“It’s just a jam session,” said Maidman. “Nobody cares if you make a mistake.”
Ganci said it’s all about getting over the fear of improvising and taking chances.
Moffett, Maidman and Hall sophomore Matt Kampe had the benefit of studying improv from Spencer Glantz, a tenor sax player and 2007 Hall graduate, and drummer Jimmy Macbride, who is a Hall senior this year.
“They’re very good because they know what they’re doing” said Kampe, who plays saxophone, clarinet, bass clarinet, piano, guitar, drums, didgeridoo, recorder, harmonica, and bass guitar.
“I thought they taught the class really well,” said Moffett, who plays piano in addition to sax.
Glantz said teaching the class helped him become a better musician, too.
“It forces me to learn more about improvisation,” Glantz said.
Glantz took the improv class as a fifth, sixth, seventh and eighth grade student before teaching it in his junior and senior year. He said part of the reason he took on the job of teaching it was because of all the years he’d been a student.
The hardest part about teaching, said Glantz, is keeping it interesting.
He played CDs of various jazz artists at the beginning of class, trying to get students “excited and exposed” to the music.
Glantz kept students motivated for two years, mentoring some outstanding young jazz soloists who now fill the ranks of the jazz programs at Hall and Conard.
“Anyone can improvise,” said Glantz.
The toughest thing about teaching improvisation, said Ganci, is “trying to get students to understand the balance between discipline and letting go.”
But excellence can be fun.
“I’d definitely suggest this class to other kids,” Moffet said.
The class is a training ground for serious high school jazz musicians – those who hope to be part of the Hall jazz program and take the stage at the annual spring Pops ‘N Jazz concert.
Improv class starts for the school year this week. It is open to any band student at King Philip or Bristow Middle School, the two schools that feed into Hall High.
On a good day, about 15 kids show up, but sometimes, there are as few as two.
“Everybody can express themselves,” said Ganci. “It’s okay to make mistakes. It’s necessary to make mistakes. That’s part of the process.”
For newcomers, it can be scary to improvise. Just thinking about chord changes can get overwhelming. But the class can help a lot. Older students – who often try to outdo each other on solos – frequently offer additional advice.
“Improvising allows you to get to know yourself,” Ganci said. “It’s like having a conversation that makes sense.”

Kiernan Majerus-Collins is a Reporter for Youth Journalism International.