NEW LONDON, Connecticut, U.S.A. – It is unusual, to say the least, to set a government document to music.

But composer Neely Bruce pulled it off, when a packed audience at the historic Pequot Chapel at Mitchell College gave him a standing ovation after a spirited performance of “The Bill of Rights: Ten Amendments in Eight Motets.”

Bruce used a variety of compositional techniques to make the piece work, including mirroring the style of music with the specific text that is sung at the same time. 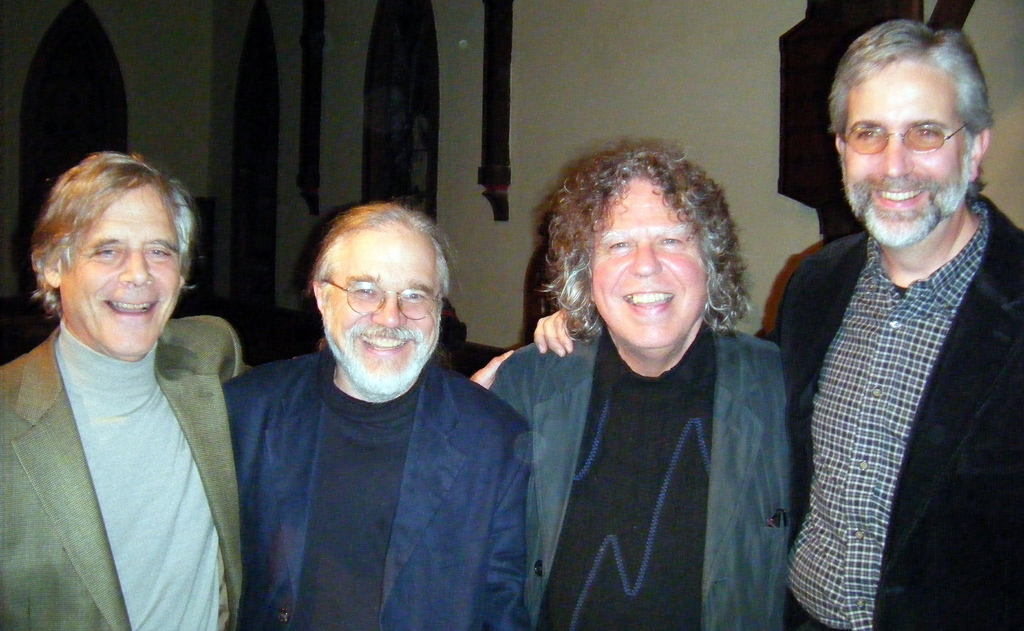 Composers Row: (from left to right) Gerald Shapiro, Robert Carl, Neely Bruce and Ken Steen at the Mitchell College performance of Bruce’s “The Bill of Rights: Ten Amendments in Eight Motets.” Shapiro is a professor of music at Brown University, where he is chair of the music department. Carl is chair of the composition department at The Hartt School, University of Hartford. Bruce is a professor music at Wesleyan University. Steen is an associate professor of composition and music theory at The Hartt School. (Kiernan Majerus-Collins/YJI)

In the part that covers the amendment prohibiting cruel and unusual punishment, there are “cruel and unusual dissonances that will punish your ears,” Bruce quipped, in his introductory remarks to the audience.

Bruce said a conversation with the late composer Henry Brant prompted him to write this unusual piece.

The two composers liked to walk and talk together, Bruce said. On one walk in 2005, Brant, who was then 90 years old, stopped him and asked, “Neely, what can we, as composers, do about the current political situation?”

In response, Bruce decided to put the Bill of Rights to music.

He said he was distressed by a survey on the future of the First Amendment. The study, done by the University of Connecticut and commissioned by the John S. and James L. Knight Foundation, showed that about a third of American youth believe that the First Amendment goes too far and that the press has too much freedom.

Bruce said that he sat down to write at Brant’s home in Santa Barbara, California, and “in a day and a half,” he had finished the First Amendment.

Despite what some might think, Bruce said putting the Bill of Rights to music was not difficult.

“It was very easy to write,” Bruce said.

“Once you sing something,” he said, “you remember it forever.”

The October 20 performance of “The Bill of Rights” at Mitchell College was only the fourth time the work was presented as a whole. The Mitchell College Singers made up about half of the choir. Bruce and his wife, Phyllis Bruce, also sang in the choir, which included soprano, alto, tenor and bass parts, accompanied by organ and flute.

The large chorus of more than 40 voices that night had an impact that a smaller group could not. They sounded like the people of America, singing for their rights.