BRISTOL, Connecticut, U.S.A. — High school is surreal.
Experiencing September 11th in high school is even more surreal. And one year later, the day never ceased to surprise me.
It was just a short year ago that I was sitting at lunch, hearing the news for the first time. Everyone was anxious to find a television set, but the classroom cable hadn’t been set up yet.
We got through school fairly quickly that day, and rushed home to be overwhelmed with images of the morning’s events.
Some students didn’t even have to wait that long, as panicked parents called out their kids. 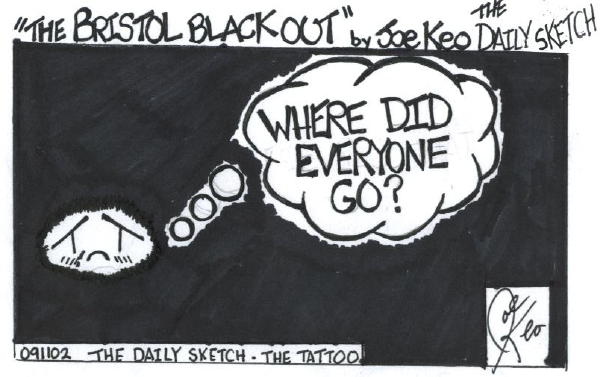 This September 11th, the television in school works, but no one was watching them. Why? Well, it is school.
But more surprising, we lost power. The whole town of Bristol lost power, some for a few minutes, and others for almost a day.
That September day was extremely windy, with tree branches falling left and right. I guess one fell on a generator or something.
Anyways, it’s only second period, around 10 a.m., and almost time for lunch. I must admit, we all got the jitters for a few seconds as the lights flickered, and then turned off.
The clocks stopped (although they always do) and the halls fell silent as all the background noise of ventilators, computers, heaters, and so forth all went dead. All you could hear was the howling of the wind outside.
Crisis was averted when everyone finally realized the sun was out and we could see the chalk-board, and classes resumed only minutes later, even if left in the dark.
What I like about Bristol Eastern High School is that nothing will stop this school from teaching its disgruntled kids, not a power outage, terrorist attack, whatever.
Hope arose later that day, at third period, when students must’ve begun reading their handbooks or something out of boredom in study hall. If power was out in the school for over an hour, the administration would’ve been forced to dismiss us early.
Being so pessimistic, I just hoped the lunch ladies could still cook us something for lunch.
I was starving.
One hour passed, and we were just waiting for the voice of one of the principals over the intercom, saying school will be dismissed early. We later realized the intercoms wouldn’t work because we had lost power. Many teachers also had that same revelation trying to copy off homework assignments, I’m sure.
But within a matter of minutes of what should’ve been a near dismissal, the power went on, and so did the fire alarm.
And once again, we were all left to let the school day end itself normally, and rush home to check if our homes had power. Many, including mine, didn’t.