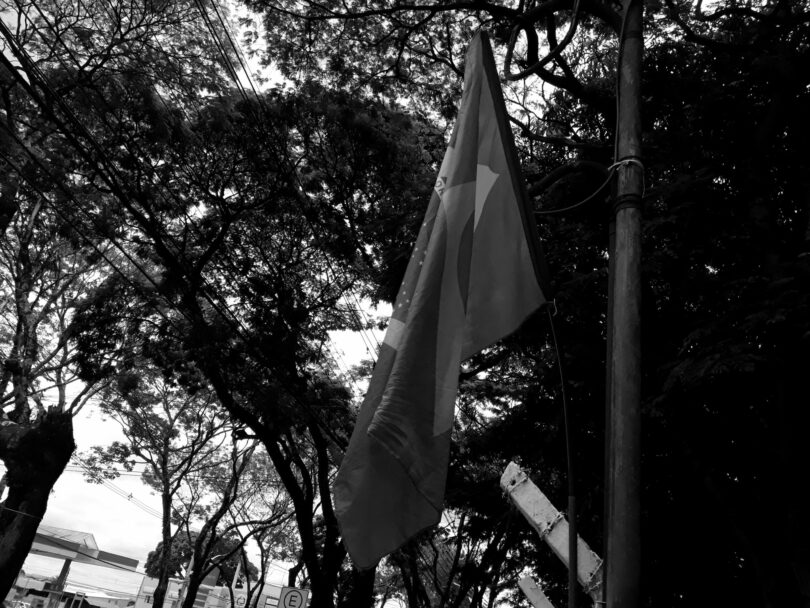 The green, white, blue and yellow of Brazil's flag is getting darker with the actions against freedom and democracy, which are defended in the 1988 Constitution of Brazil. (Nicole Luna/YJI)

Maringá, BRAZIL – After rioters invaded the Palácio do Planalto, or the president’s house on Sunday, President Luiz Inácio Lula da Silva declared federal intervention – an emergency step only taken by the government when national security is at risk.

In Maringá, the local mayor, Ulisses Maia, shared a post on City Hall’s official  Instagram showing an urgent meeting he had with the police.

In this encounter, Maia ordered the removal of any pro-Bolsonaro barricades or other hindrances that are disorganizing the downtown.

“Things in Maringá are strangely calm, though the city has the biggest part of Bolsonaro’s supporters,” said Beatriz Simplicio, a 20-year-old woman who works at Credilibs.

Supporters of the former president were camping in front of the National Guard Civic School of Maringá, called Tiro de Guerra in Portuguese.

When a reporter tried to take some pictures of it, she found the camp zone removed and just seven people remaining.

When the reporter took a photo of the flag, an unidentified woman said in a hostile tone, “If you take a picture of me, you’re going to have serious problems.”

She said some reporters went there Sunday, and other journalists went today after the mayor posted that these movements are against the law.

All the supporters seemed hesitant to speak, including an older man.

“I can’t provide you with any information,” he said when asked what happened with the campaign.

“If you want to join the camping or know more about it, you should go to the G10 company,” said another woman with a suspicious look, referring to a local transportation company where pro-Bolsonaro protesters are gathering.

“This action isn’t going to be temporary, it turned into a phenomenon that will remain in the next governments. It will affect the current presidency and Brazil’s democracy,” Simplicio said, worried.

According to her, despite Bolsonaro being distant during these protests – he is in the state of Florida in the United States – she believes the former president is indirectly involved with it.

“He has been encouraging it on social media,” Simplicio said.

Uncertainty about the future is everywhere across the nation.

Some Brazilians are afraid of what the future will bring, while others are downplaying the latest happenings.

In Maringa, the situation is relatively quiet, but no one dares to mention what happened on Sunday.