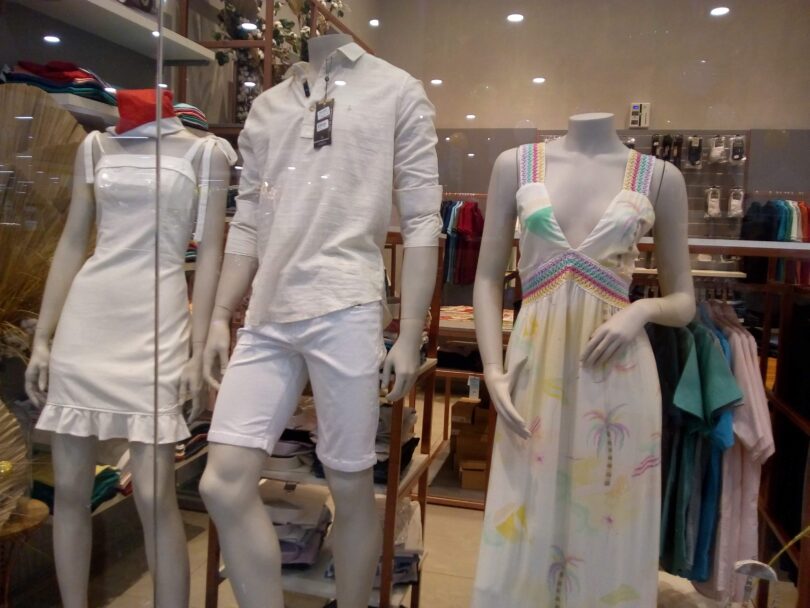 Maringa, BRAZIL – “Ho, ho, ho” is what the western part of the world was listening to during the Christmas season, and it wasn’t any different here in Brazil.

When people talk about Christmas, they usually relate it to the Northern culture, but what they might not know is that south of the Equator, in South America, Christmas celebrations are also common.

While winter freezes everything in the United States, Canada and other northern countries, Brazilians adapt Christmas to the broiling heat of summer.

This weather difference gives a unique appearance to the celebrations here. Instead of having snow, handmade scarves and warm clothes, we have artificial snowmen and trees, flip flops, shorts, t-shirts, fruits and icy desserts!

People usually have a variety of fruits and vegetables at the holiday banquet, such as watermelon, pineapple, papaya, avocado, mango, banana and salad.

Brazilians also have the classic turkey, but they add the tender and the pork shank. An interesting historical fact about the pork shank is that Brazilians began implementing it back in the colonial period because it was cheaper than the cod fish from Portugal.

Brazilian creativity is unbelievable, isn’t it?

The Christmas banquet in Brazil is really abundant. There are the traditional dishes – rice with soaked raisins, salpicon and farofa. The rice is cooked in the oven and it is a mix of vegetables, like carrots, corn and green peas with soaked raisins.

The salpicon is made of mayo with chicken, stick potato chips, vegetables and more raisins.

And the farofa is prepared with cassava flour with some seasonings, bacon and pepperoni.

But each person can personalize their farofa and prepare it with what they like.

Sonia Pereira da Silva, 44, who works on Honda Freeway, suggested a farofa made with banana, butter and spices that her family usually has.

Moving away from the table, do you know that Brazilians also take Christmas decorating seriously? From malls, stores, public spaces to houses, people start to decorate everything with LED lights in early December.

We also have the special presence of Santa Claus in the shopping malls. Kids love taking a photo with Santa and telling him their wishes.

The main difference is that in Brazil, we don’t have the same pine species of trees as in the northern hemisphere, so people usually decorate their own tree or buy an artificial tree.

The spirit of celebrating Jesus’ birth and family gatherings is the same in Brazil, although each person has a different perception of it.

Pereira da Silva, a woman who always celebrated Christmas, said that despite it being good at its core, capitalism has become its main goal.

“Nowadays, consumerism is messing up with the values of this date. People are not as interested in its meaning as they were in the past,” said Pereira da Silva said.

Despite Christmas being celebrated in many countries, each culture has its own important dates that are valued. In Brazil, Carnival and Saint John (São João in Portuguese) are two traditional dates that people love the most!

Okay, Christmas in Brazil has some similarities and unique traditions. But how about New Year’s? Is it different, too?

Brazilians often gather their family to celebrate the passage of the year. In these gatherings, they have dinner together – especially barbecue. Anxiously, we usually count down the last seconds of the year and when it’s midnight, we pop champagne and wish a happy new year to each other with a warm hug.

There is also a superstition behind the New Year.

Brazilians traditionally dress in colorful clothes with the belief that each color attracts something to their life. When you want to have more peace in the next year, usually you should wear white.

If you’re looking for more success and money, definitely Brazilians would dress in yellow. But if they want to fall in love with someone, they would go with red. Or if they are wishing for hope, green is the perfect color!

No one really knows when or how this tradition began, but most people strictly follow it. Clothes stores love this cultural habit, since it’s when they sell more.

Like a magic box with precious treasure, each country has its own history, traditions, habits and beliefs that makes it authentic.

In Brazil, the magic is in our creative blood that adapted Christmas and New Year’s, two biggest events, to our own culture.

From Brazil, I am wishing everyone happy holidays and a prosperous new year! Or as we would say in Portuguese: Boas festas e um próspero ano novo!