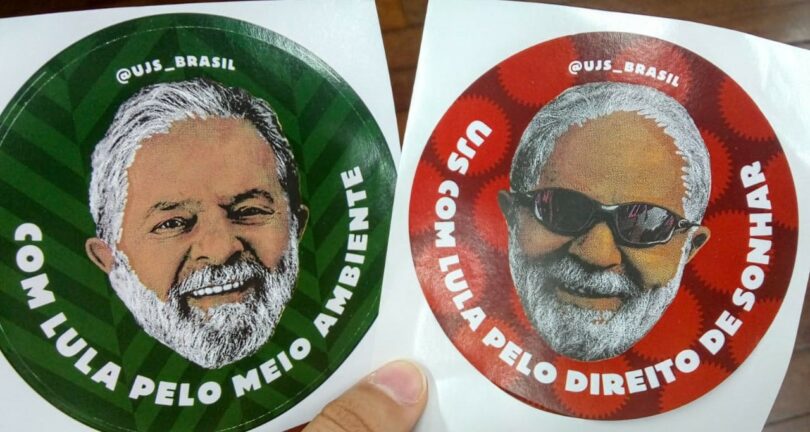 Maringa, Paraná State, BRAZIL – Since early this month, Brazilians have been preparing their voting cards to elect the next president in a tight runoff between the current president and a former one.

But Brazilian youth aren’t as involved as they could be.

“When I was in the line to vote, I didn’t see many people of my age. I just saw five young voters,” said Ana Carolina Saturnino, a 16-year-old high school student at Colégio Parigot de Souza in Mandaguaçu, Paraná.

Milena Fugisaki – who voted for the first time – said the main reason young people keep this distance from politics is because they are not worried about Brazil’s future.

“While people seem to be disinterested with the election, I think it’s strongly important. It is not about our opinion, but how it deeply impacts the future of the nation, and my future as well,” said Fugisaki, an 18-year-old high school senior at Colégio Estadual Alfredo Moisés Maluf in Maringá, Paraná.

According to Fugisaki and Saturnino, voting this year has been challenging, especially for young people. Most of the voters were divided between the former president, Luiz Inácio Lula da Silva, and the current president, Jair Messias Bolsonaro.

The two leaders are in a runoff election after they collected the most votes among a larger slate of candidates earlier in the month.

“This year’s election run is very tight, because even if I had decided to vote for another candidate, they wouldn’t win. They wouldn’t have the minimum number of votes to run against Lula and Bolsonaro in the second round,” Fugisaki said.

This second round of competition is due to the Brazilian criterion of absolute majority. Under these rules, a candidate is elected in the first round only when they obtain more than half of the valid votes.

If it doesn’t happen, another round is necessary to decide who is going to be elected. That is the case of Bolsonaro and Lula now.

Despite the high stakes, many Brazilians don’t bother voting.

According to the Superior Electoral Court, there were about 156 million voters able to vote, including 8 million young Brazilians under 20. But with the highest abstention percentage since 1993, more than 31 million Brazilians didn’t vote in the October 2 presidential election according to an online report from the Federal Senate.

Perhaps since the rest of the candidates didn’t receive the minimum number of votes, Saturnino said she thinks it divided the nation even more.

“I realized that public opinion is deeply split during this election,” Saturnino said.

Wilker said Brazilian youth are prepared to vote since they’re aware of the importance of politics, but the increasing fake news is confusing many young people.

Another reason youth distance themselves from politics is the increasing intolerance among opposite political sides.

“My family had a serious discussion in our WhatsApp group caused by the differences between Bolsonaro and Lula voters,” said 16-year-old João Vitor Aguiar. “The same happened with my girlfriend’s family.”

Aguiar, who attends Colégio Rui Barbosa in Iguatemi, Paraná, said he decided to not vote to avoid a possible problem in his family.

A similar attitude happens in schools and public spaces.

Hugo Marciliano, 17, is a senior at Colégio Estadual Jardim Independência, in Sarandi, Paraná. He discussed the political intolerance at his school.

“Offenses and verbal violence are common in my class, because half of the students support Lula and the other half support Bolsonaro,” Marciliano said.

Saturnino is afraid of the possibility of a violent reaction on October 30th, when the second round will take place.

“People could even invade the Palácio do Planalto (the governmental house), if they don’t agree with the results,” Ana said in a worried tone.

These young voters found the process of voting through the electronic voter machine very simple.

“Before voting, I found on the internet a voting simulator that instructed me how to use the machine to vote. It’s cool to vote through the electronic vote machine, since it’s more practical and more accurate,” Fugisaki said.

Voting machines have been used in the Brazilian elections since 2000, when they began to be widely adopted and replaced the common paper ballots.

Authorities decided to implement the machines, which are not connected to the internet, due to their simplicity and security.

“It’s much better when compared to the paper ballot we used in the past,” Fugisaki said. “It is also faster and safer, especially because the elections can be done in the whole country in only one day.”

Asked about what to expect of Brazil’s future after October 30th, Fugisaki said, “I hope people will consciously vote, no matter who they’re going for, and that we could elect the best candidate for the country.”

Saturnino is optimistic about Brazil’s future.

“I hope that my candidate will win, even if I have to deal with the possible consequences of my choice, and that we have some positive changes in our country,” she said. “I still believe in the Brazilian people.”