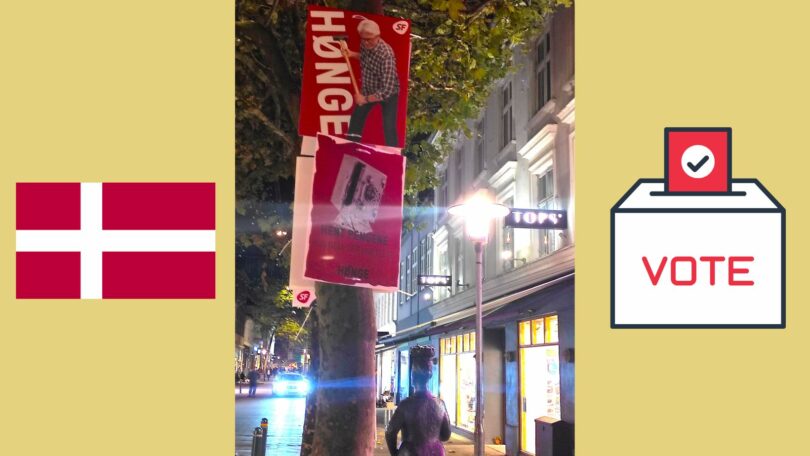 Campaign signs that urge Danish voters to elect those who will "get money from those that have the most." (Photo by Amy Goodman/YJI)

Right-wing nationalism seems to be on the rise in Europe. While movements like Brexit seemed a fringe phenomenon just a few years ago, the elections in some European countries this year suggest that Western European politics is changing.

France’s far-right candidate Marine LePen gained traction – although not power – in this year’s election. The far right in Italy, helmed by Giorgia Meloni, is poised to form a government, and the Swedish Democrats, a far-right party with its origins in the 1990s Swedish neo-Nazi movement, as reported by the BBC, has taken power in the Swedish parliament.

Denmark is next to visit the election booths. On November 1, Danes will cast their votes, and how right or left-wing the next government will be is a question looming over this election.

You may not have heard much about Denmark beyond its pastry or bacon. Yet this small country’s rare political structure, high-taxes and generous welfare state are a window into how a left-leaning state responds to a war in Ukraine, economic crisis, and mounting global tensions.

As explained on the Danish government website, the Danish system does not require a majority of votes to form a government. Instead, the party simply needs to have the absence of a majority against it, or in other words they need more in Parliament who support them than oppose. In Denmark, there are many parties from which to choose, with 17 parties forming the current government. This promotes more collaboration between parties.

What is considered “extreme,” “progressive” or “conservative” in Denmark may be very different than where you live. What is considered centrist in Denmark would be seen as very left-wing in the United States. Aspects of Danish culture like Janteloven and a focus on “fairness” have led to Denmark’s welfare state that prioritizes social equity.

According to Denmark’s national news publication, Danmarks Radio, some of the main sources of debate in this election are healthcare, immigration, and welfare spending.

As reported by the BBC, current Prime Minister Mette Frederiksen ordered a culling of the nation’s mink during the height of the covid-19 crisis. Mink are a small animal bred for their fur. After fears rose that a (now extinct) mutation of the Corona virus found within the industry could cause global damage, Mette Frederiksen ordered the culling of all the animals in Denmark.

This, in effect, destroyed the mink farming industry and led to massive government compensation for the farmers.

National outrage followed, with accusations that Frederiksen acted illegally during the case. According to Danish newspaper Alttinget, a significant number of politicians have now launched widescale criticism at Frederiksen and others involved in the case. A government inquiry to review the case is in motion.

Young Danes and the right wing

Mikkel Bjørn, a Danish school teacher running with the Nye Borgerlige right-wing party spoke about why he believes there are so many young candidates in his party. As reported by Politico, Nye Borgerlige are a party that is strict on immigration, strict on refugees, skeptical of the European Union and propose strict conservative financial policies.

When asked why there are so many young candidates with their faces shown on the streets of Odense, Bjørn attributed the support to one of freedom.

“I think more and more young people have woken up to both the reality of economic politics and freedom-oriented politics,” Bjørn said. “One is very used to grow up in a society where the state decides a lot of one’s life, regulates and steers – so I think that a countermovement has appeared.”

Yet, considering Denmark’s high number of opportunities for young people – free education, universal education grants and high ranking on the global youth development index – this may seem puzzling for many.

Two new parties appeared in this election, and as reported by Danmarks Radio, both are using their leaders as their main campaign focus.

Danmarksdemokraterne is headed by Inger Støjberg, Denmark’s former immigration and integration minister. As reported by the Danish newspaper Information, Støjberg was taken out of the centre-right “Venstre” party – she was once a deputy chair – after a scandal where she had separated young asylum-seeking couples. This garnered attention outside of Denmark, with The Guardian reporting on the subsequent impeachment trial that ended with a suspended prison sentence for Støjberg.

Less than a year after her conviction, Støjberg is seeking office again, this time running with Danmarksdemokraterne, the party she created. Her tough on immigration stance is reflected in party rhetoric. Danmarks Radio reported that there is a clear suggestion that she is appealing to the interests of rural and older votes with mandates like increasing the availability of doctors in areas with limited access, providing mobile network connections all across Denmark and limiting the impact of climate change policy on agricultural jobs.

Another former Venstre party member is Lars Løkke Rasmussen, a former Danish prime minister known in part for his spending scandals. As reported by Information, Rasmussen is now running with his new centre-right party Moderaterne, which means Moderates. According to the news site Avisen Danmark, polls suggest around 1 in 10 Danes are ready to vote for Moderaterne with its conservative financial policies and focus on Danish values and culture.

Both parties are using their leaders to propel their main campaigning strategy and are both very much rebels against the establishment.

As reported by Danmarks Radio, the party Liberal Alliance has found itself in controversy regarding their recent television ads. Political advertisements are illegal on Danish television, yet because they ran the commercial with a station that broadcasts from Sweden, the party argues it is legal.

This is a party whose rhetoric focuses on independence and individualism, taking the form of policy that emphasizes lower taxes and challenging the establishment. Some would argue that this borderline rule-breaking behavior is very much in character.

Where the election will go

As reported by the Danish news organization Jyllands Posten, the data so far suggests that the left-wing may have the lead. This summer saw a spike in backing for the “blue block,” or right-wing, but polls suggest that this has somewhat decreased.

The main race for prime minister is between the leaders of the right-wing Den Konservative Folkeparti, which means The Conservative Peoples Party, the left-leaning party Socialdemokratiet, or Social Democrats who are currently in power, and Venstre, which despite its name, which means “left,” is a centre right leaning party.

When the public takes to the polls on the first of November, will Denmark’s future reflect the right-wing nationalism sweeping across Europe? Will conservative policy change Denmark’s welfare state? Or will Mette Frederiksen overcome her mink troubles?

Despite this uncertainty, what is clear is the rebellious streak coming through in Danish politics.

Amy Goodman is a Senior Reporter with Youth Journalism International.