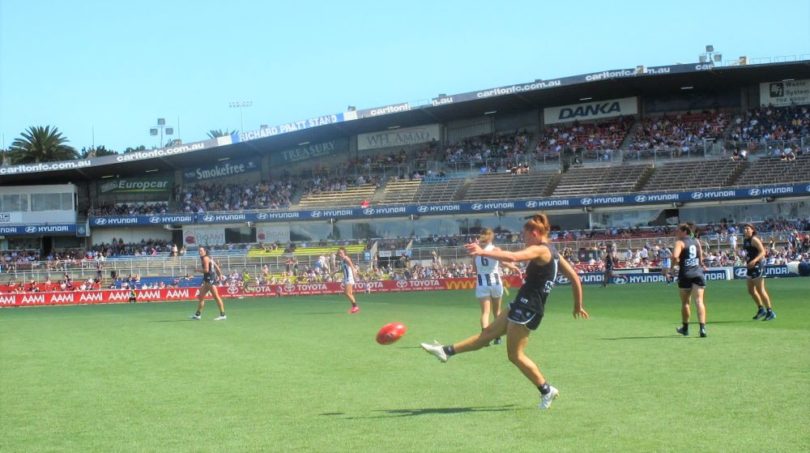 Fans and players alike are trying hard for equality and respect for AFLW, but those with the power are not helping. This action is from a Action from a 2020 Australian Football League Women's match between Carlton and Collingwood. (Alyce Collett/YJI)

Melbourne, AUSTRALIA – It was International Women’s Day once again this week, which means it’s a great opportunity to reflect on how far we’ve come as a society. It’s also a chance to raise awareness of the many, many issues that women still face in the world.

Events in the past few weeks have highlighted the importance of language in the ongoing effort toward respect and equality for women, particularly in sports.

There have been many instances recently, particularly with regards to the Australian Football League and its partners, where inadvertent phrasing has given off the wrong message to many fans and players alike.

The first was a tweet from the league’s official Twitter account, talking about how the tickets for the men’s practice matches were about to go on sale. In the post, they said, “Footy’s back!” implying that the previous five rounds of the Australian Football League Women’s season that had been played up until that point were somehow not footy.

Thankfully the post has since been taken down, but it was the beginning of a bit of a trend emerging on Twitter from the league and its partners.

Next up was Fox Footy, which is a pay TV channel in Australia and one of the league’s broadcast partners. Now they are an even bigger culprit than the league for inadvertent sexism in their wording.

The first reported case was a video published by the network on Twitter ahead of the first practice match of the men’s season. In the video, famous former cricketer Shane Warne says how excited he is about the first match because his team is involved, but he then described the game as ‘proper footy,’ again implying that the five rounds of the women’s season that had been played up until that point were somehow not proper footy.

Though this might sound weird, it was heartening to see the backlash Fox got for this tweet. Many people were quick to point out the arrogance of his choice of words, which was pleasing to see in a comment section that in the past was notorious for the presence of anti-women’s league trolls.

Another satisfying thing to see was after that happened, a little bit of a Twitter trend –  #properfooty – began to emerge amongst the women’s league fans who had seen the Fox Footy post. Using the hashtag, they posted photos from women’s matches to highlight how the women’s league is still proper footy, despite what some may think.

The third example of bad language choice came from a footy analysis show on Foxtel on Monday night. A graphic used at the beginning of the show said, ‘Tonight’s Agenda – first taste of 2021 footy,’ referred to the men’s practice matches that occurred over the weekend. This was another instance of those at Foxtel seemingly forgetting that we’re already in the middle of a women’s league season.

It was even happening at the actual practice matches, with the ground announcers mentioning in their broadcasts, ‘Footy’s Back!’ which is just not true.

Footy had been back for over a month.

These instances highlight how important it is to use the right phrase. Women’s football is already fighting hard enough for the respect and equality it deserves, and this kind of language is just making things harder.

It just sends the message that these organizations really don’t care about the women’s league after all, and are just in it for the money and good public relations it brings.

So Australian Football League and Fox Footy: if you’re reading this, there’s something simple you can do to improve this situation and never have this problem again.

Just add the word “men’s” to your tweets and graphics when you’re talking about the men’s season. It’s not difficult. It may seem trivial, but it is worth it in the respect you will get in return.

And you would do it without prompting if you were really all for respect and equality like you say you are.