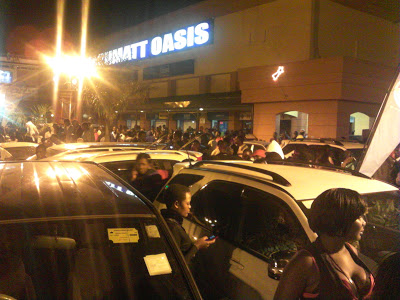 KAMPALA, Uganda — What does New Year’s Eve mean to you?

Is it to smoke weed until you pass out?

Booze your way to the new year?
Midnight shopping at Nakumat Mall?
These were some of the activities that ushered in the new year for many young people in Kampala who were also hanging out at favorite hotspots such Nakumat, Height, Efferndys and Club Silk Street Jam.
At 7:30pm, I got a dinner invitation from Babaluku, an influential Canada-Ugandan conscious hip-hop artist, to the a classy Chinese hotel, where he shared his plan to use hip hop artistry to teach youths about hip hop, peace building and community responsibility.
Speaking at Fang Fang Hotel, Babaluku also share with me his dream to train “Ship Crew” (young hip hop artists in Uganda between the ages of six and 11) to use their music to influence their communities, school and families.
After my long chat with Babaluku, I started visiting some of the favorite hangout spots for young people, including the Nakumat Mall, Heights and Kyoto. At all of them, I found youths boozing their way to 2012.

A multitude of young people gathered around the shopping mall since it’s the strategic spot to view fireworks from the Serena, Sheraton, Garden City and Fairway hotels.
They stayed until 6 a.m.

Some of the young people blacked out from drinking so much and were taken on boda rides back home.
But others preferred to spend their time in church congregations such as Watoto Central, Miracle Centre, Nakivubo Stadium and Mandela National Stadium, thanking the Lord for an amazing 2011.
This does not mean that those youths who didn’t make it to the city didn’t also have fun.
They just did it their own way.
Some were seen burning tires and dancing to their favorite local jams like “Bolingo” and “Stamina.”
Now that we are already here in 2012, everyone hopes to make something of it, too.
Daniel Gilbert Bwette is a Reporter for Youth Journalism International.