BRISTOL, Connecticut, U.S.A. — Each day, hundreds of students walk down the chilly, hollowed out hallways of what has become Bristol Eastern High School, and many of them wonder what exactly is behind the “coat rule.”

Established in 1994, the “coat rule,” as it is so commonly called, states: “Outerwear garments and all head coverings must be placed in lockers upon arrival at school. Items will remain there until a student departs.” 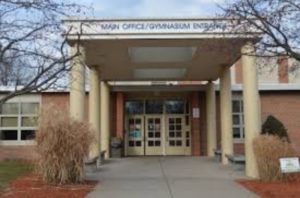 Students who break this rule risk losing their hats or coats until the end of the day or even the end of the year, depending on how serious the offense and how cooperative the student.

Like most rules, it is, for the most part, routinely obeyed.

Although it is common to see a teacher reprimanding someone who is wearing a jacket in school, for many students and faculty the exact reasoning behind the rule is unknown.

Wearing a blank look, Andrea Kozyrski, a freshman and Eastern, said that she didn’t know why the rule was in effect.

“I don’t know,” she said. “Maybe because we could stick weapons in our pockets?”

This seems to be a common speculation.

Michael Parker, an intern teacher at Eastern, also thought that weapons might play a part. “You have to consider the hidden items that could be dangerous,” he said.

Parker said he thought manners were also a consideration.

“It’s keeping with the general etiquette for the building,” he said. “When you walk into a building, you take off your hat and jacket. It’s common courtesy.”

But assistant principal Boyd Biondino said that although etiquette and weapons may have been components in why the rule was put into effect, neither were the core factors of the policy.

Biondino said that the rule was a pro-active movement to keep strangers who could be dangerous to students outside of the building by identifying them by their outerwear.

“We knew that we could identify non-students visually with a no coat policy,” he said.

Staff members are supposed to notify administration if they spot an individual wearing a coat, he said, and various staff members are equipped with walkie-talkies for easy communication.

“We’re trying to make the building safer for all who use it,” Biondino said. He said he sees no need for coats to be worn inside.

“The building is climate controlled, and it’s not necessary to have outerwear,” he said.

Biondino states that the rule has been “non-confrontational,” and that students “like the idea that this is a safe school.”

“If you want to wear [a jacket], you should be able to,” said senior Tim Shone.

Shone said the rule isn’t always enforced. “If you don’t get in trouble and just mind your own business, they don’t say anything anyway,” he said.

Kyle Younghans, a freshman, said he doesn’t see a point for the rule.

“What happens if it’s cold? Besides, it’s a pain to go to my locker, and I don’t know where it is or my combination,” he said.

Some teachers do, however, offer their closet and room space to students to keep their coats, though many find it to be an inconvenience, especially with the construction.

Since the heat is turned off during the weekends and isn’t turned back on until Monday morning, some members of the faculty are willing to look the other way when they see a student wearing a jacket until the building warms up.

“My job is to make the classroom comfortable,” said Mike Beaudoin, a math teacher at Eastern. “If the cold gets to be a distraction, then we have to eliminate it.”

With winter in full force, the need for a rule banning coats is in the mind of the students at Eastern as they wonder — is it a necessary policy, or just an inconvenience?