For couples who want a child – or who want to avoid pregnancy – knowing when the woman is fertile is critical.

As a designer at The Sessions Clock Co. in Forestville , John Paul Jones Jr. helped create The Lady Sessions, a clock designed to track a woman’s menstrual cycle.

“I’d never heard of anything like it before,” said Jones.

Sessions created “The Lady,” billed as the world’s first “family planning” clock, for the sole purpose of counting a woman’s menstrual cycle, according to Chris Bailey, curator at the American Clock and Watch Museum . 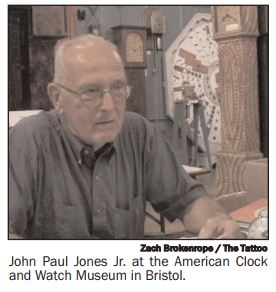 But the clock didn’t have much production time, because Sessions closed in 1968.

To use the clock, a woman would set that clock to her specific period. Then, during the days she was most fertile, a small dial on the clock would turn red.

Because the rest of the month posed less of a danger of pregnancy, Bailey joked that the dial ought to appear green on those days.

“Everyone thought it was great,” said Jones.

According to Jones the women who worked at Sessions thought the idea of the clock was wonderful.

At Sessions, Jones helped design and create “The Lady.”

“It was a new experience,” Jones said.

Jones said the company’s chief engineer gave him the assignment.

Jones helped design the motor, he said, so the clock could have a Sessions movement. His work ensured that the colored “flags” inside the clock that appeared in the indicator window popped up at the right time.

“It was very easy to do,” Jones said.

An electric clock, The Lady Sessions also served as an alarm clock. It was packaged with a fertility table showing the probable fertile days based on the length of a menstrual period.

“This remarkable clock accommodates the cycle variance of the vast majority of women,” reads the Sessions literature included with the clock. “It indicates probable safe days and probable days of fertility all through the month … just as dependably as it tells the time all through each day!”

The clock uses “the medically accepted rhythm method,” the information from Sessions says.

While it was certainly an unusual concept, the clock generated some controversy.

“The Catholic church was upset about it because they considered it birth control,” said Bailey.

For Jones, Sessions was an early stepping stone in a mechanical career after a two-year stint in the U.S. Navy.

“I was hired by chance,” he said. “I came in and interviewed, they liked me, and they hired me.”

A Waterbury native, Jones had come back to Connecticut after his time in the military, met his wife and started a family.

The Sessions Clock Co., which by that time had already been open for more than a century, was a premier clock company based in Forestville.

“I was hired to work on motors and clocks,” he said. “At first I did a lot of case design though,” he said as he pulled a large pile of papers out of a box on the table. Each piece of paper had a picture of a clock, and proudly pointed out the ones he designed.

Jones said he enjoyed working at Sessions, a place he described as like a family. He said the company was ahead of its time because women and men worked side by side without differences in the jobs they did.

In the 1960s, Jones quit Sessions for a time and began working for Royal, a typewriter company, as a draftsman.

He said he made the move because he needed “to advance himself.” After leaving Royal, Jones returned to Sessions and began working on a new program at the company called PIP.

“I enjoyed everything I did,” Jones said of his time at the company. “We [the employees] all had a good relationship.”

Jones remained at Sessions for a short time again, before moving on to other jobs.

Today, Jones, 71, is retired. He and his wife live in Bristol, where they enjoy watching their grandchildren grow up.