Aurora, Nebraska, UNITED STATES — “You know, if we were in a movie, right? There are two ways this could end up. We could either have like this really life-changing walk or could be killed by some psychotic murderer,” I say as Jake, Amanda and I walk down the street at 5 in the morning.

“Well, I hope I make it to the sequel, in that case,” Jake says and laughs.

It’s the morning after prom and our ride has apparently ditched us, leaving us no choice but to walk two miles to Amanda’s house.

“That was good,” Amanda says, as Jake holds her close to him.

It’s cold outside and Amanda doesn’t have a jacket of any sort. Amanda is a senior, and perhaps one of the coolest people I know. She’s a role model really, someone who stands up for what’s right, no matter the consequences. 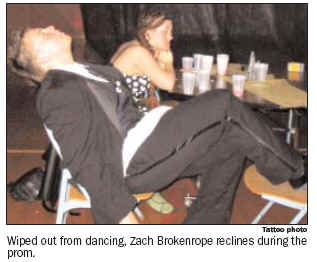 Then there’s Jake, whom you can’t really describe. I guess you could say he’s glamorous. No matter what he does, he does it with poise, and his goal in life is to be a model. Enough said.

“It was good,” I say. Despite being in the 30s out, the night is beautiful, not a cloud in the sky and the air is dry. You can see your own breath hover after each word. “I think we ticked a few people off with our dancing though.”

“Screw them,” says Jake. The whole night we danced crazy and different than everyone else there. We over-exaggerated each movement, we bowed to our partners, danced in circles like flower children, and danced ballet.

“I really don’t care anymore,” Amanda says. “I’m outta here in a few months and I’m not looking back.”

It’s scary for me to think about, but it’s true. My senior friends are leaving me behind and moving on in life.

“I liked prom but after-prom sucked,” I say. Every year the parent committee organizes a post-prom party in order to reduce teen drinking and sex, but this year they managed to totally spoil it by giving it a NASCAR theme.

“Yeah … it is,” Jake says as a car slows down and then passes us.

“Life is going fast,” Jake says. “I can’t believe I’m going to be a junior next year. It’s kinda sad.”

There are completely random moments in life that you don’t want to end, moments when you want to stay frozen in time, and as we walked down that street, freezing in the cold, I wanted to stay there forever.