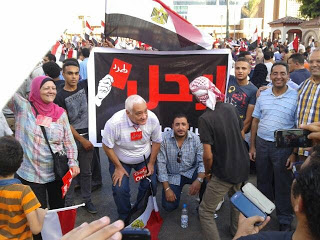 ALEXANDRIA, Egypt – Here we are on the 30th of June, an exceptional day where, finally, a beam of light will shine through the darkness.

It’s not only the beginning of a new revolution, but also the day we’ve been impatiently waiting for.

The name of this revolution is “Rebel,” which began as a campaign which was launched in late April by members of the opposition in Egypt.
It aimed to gather 15 million signatures throughout Egypt before June 30 demanding the departure of President Mohammad Morsi and asking for early presidential elections. It got more than 22 million.

Those people are now standing in the street holding signs asking Morsi to leave because almost nothing has been accomplished under his leadership to achieve the goals of the Jan. 25 revolution.

There is no justice, no national independence and protesters are dying just because they’re standing for what they believe in. There is still economic instability, reduced production rates of oil and natural gas, and electrical shortages throughout Egypt’s cities.

Now Egyptian citizens are gathering in famous public gathering spots such as Tahrir Square in Cairo and Adaweya Square in Nasr City, along with many others throughout the country.

Those people won’t leave until their demands are met because they have given up on the current president. He has hasn’t worked hard enough to meet the responsibility that he was given to lead this great country.

Some people who are on Morsi’s side, such as the Muslim Brotherhood, are claiming that people who are protesting today are against Islam or were supporters of the previous president.

It’s not about the religion. Just because people are standing against Morsi and the Muslim Brotherhood doesn’t make them anti-Islam. Most are proud Muslims.

And now we’ll all stand together, Muslims and Christians, all hand-in-hand, for Egypt’s sake and for all those who died trying to make a difference.

Egypt deserves so much better. It has always been the land of safety and freedom. So we will keep fighting for our country.

Dina El Halawany is a Reporter for Youth Journalism International.