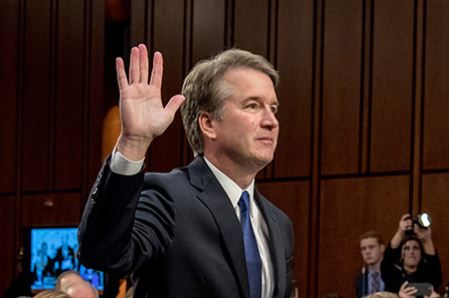 During the Senate Judiciary Committee on Thursday, Sen. Kamala Harris, a California Democrat, asked Supreme Court Justice nominee Brett Kavanaugh if it was possible for men to be good to some women while treating others badly.
Kavanaugh – accused of sexual assault by at least two women – responded that it was certainly possible, before explaining that he had many female friends and coworkers who could attest to his integrity. At an earlier hearing, members of his daughters’ basketball team even attended.
In his opening testimony at Thursday’s hearing – focused on the sexual assault allegations by Prof. Christine Blasey Ford when the two were high school students – Kavanaugh emotionally pleaded that he may never be able to teach law or coach his daughters’ team again, arguing that “a refuted allegation from 36 years ago” is not sufficient enough to destroy his life and career permanently.
If he is confirmed, he will be eligible to fulfill his duties in the Supreme Court for a lifetime, despite allegations of sexual misconduct by Blasey Ford and two other women: Deborah Ramirez and Julie Swetnick.
On the surface, it seems unjust to try a respected judiciary official for an event that may have conspired nearly four decades ago, and Kavanaugh certainly believes that he is a victim of character assassination and smear campaign to no fault of his own but partisan politics.
But in this embattled defense, there is a certain argument not-so-unique to men in places of power accused of sexual misconduct. Painting himself as the ultimate victim, Kavanaugh not only rewrites his record – his high school years, his time in a Yale fraternity, and ascension to political prominence – and manages to replace the women with feminized story devices surrounding and aiding his perceived narrative.
In the process, he imposes the culture of ‘himpathy’ on himself. It’s a prevailing pattern that prioritizes and pities men’s status above women’s suffering and morality.
In times of political turmoil such as now, we as a society often forget to listen to the women.
We acknowledge that men are not perfect, that they can hurt certain women and not others. We adopt the attitude that ‘boys will be boys.’
We are sometimes absorbed by the salaciousness of sexual assault allegations.
In 1991 and 2018, Americans listened as Anita Hill and Christine Blasey Ford took the stand and swore that Clarence Thomas – then a Supreme Court nominee – and Brett Kavanaugh committed acts of sexual misconduct that devalued the moral character fit for a judge on the U.S. Supreme Court.
Despite the 27-year difference and emergence of the #MeToo movement, both women received death threats and suffered attacks to their professional and personal lives. As Ford took the stand to testify in front of the Senate Judiciary Committee, she almost seemed too eager to please, speaking softly and attempting to accommodate the room.
When asked about her motivation to testify, she explained that it was her “civic duty” to tell the truth.
It is our civic duty to accommodate for women’s voices – regardless of the volume of her speech – as we do for men.
We should care if a Supreme Court nominee assaulted a woman 36 years ago. We must acknowledge that we as a nation are susceptible to ‘himpathy’ in discounting women’s narratives for the comfort of men. Only then, we can move forward.