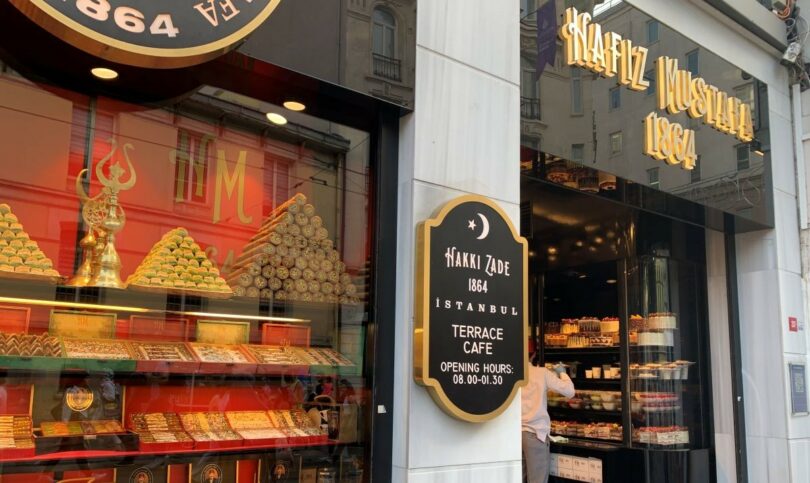 A pastry shop in Istanbul that sells baklava. (Norah Springborn/YJI)

ISTANBUL – My Turkish friend İpek Eser and I were getting simit, a bread in the shape of a circle, sometimes with seeds or chocolate.

“Teşekkürler” is what İpek said to the guy at the trolley to thank him and I said, “Moteshakeram.”

When I was counting, looking for sugar, checking the menu or drinking tea in Istanbul, I felt all of the similarities between Iranians and Turks.

Deniz Öcek and I were at the table, having tea in traditional glasses.

“We call those cups “thin wasted” in Farsi,” I said with a satisfied smile on my face. But it seemed like I was the only one who could have tea with a sugar cube in my mouth, and not mixed in my tea.

I loved the way that we had a lot of things in common. At Youth Journalism International’s Global Conference, the Turkish students, Arooj Khalid from Pakistan, and I were the happiest when we found out that the place we were staying at is Asian styled, and we had to take our shoes off.

We also had a nice, long conversation about the things that we have in common. I pointed to the way that in Iran’s culture, for marriage, the groom’s side provides the place and the bride’s side brings all the household appliances.

It turns out Turks, Pakistanis and Persians have the same thing with the same name, just different accents.

It was really hard for me to choose Iranian souvenirs to bring to Istanbul for everybody too, because many of them represented both Türkiye and Iran. I was like, “lavashak (fruit leather) is nice.” Searched it, and they have it. Same thing with kashk, or dried sour milk bites.

I took some saffron candies with cardamom in them and Erin Timur from Cyprus said that they reminded her of her grandmother. I also took some gaz with me. It’s an Iranian nougat candy with nuts. Thank God that was new to everyone.

We have some difference too, but they are not really bold. Except for this one: I’M NEVER HAVING DONER KEBAB OR BAKLAVA IN IRAN AGAIN.

Istanbul’s doner sandwich was not overseasoned, not overloaded and not super oily. The Turkish baklava was all nut pieces, like the whole baklava piece’s weight was nuts, unlike in Iran where it is mostly sugary syrup.

I like how we have more rice in our food servings – I mean I’m used to it – and how can you eat rice with fork?  What’s wrong with a  spoon? And I do like our kebabs more. The reason might be more fat and onions, in a good way, though.

Ok, I keep talking about the food. I need to stop.

Istanbul’s streets are prettier than the ones in Iran. I think the best way to describe Türkiye is to say that it’s more European than Middle Eastern. Iran is the opposite.

The streets and buildings are way cleaner and more colorful in Türkiye. The sky is definitely bluer. Iran is a polluted country, especially the air.

Sometimes schools get closed for a week or more because of the air’s condition. You don’t want to be out in the rain in the first hours of raining.

The smoke and dust in the air makes most of the colors to go grayish, that’s why I said that Istanbul is more colorful. White is not gray there. Red is not brown and green is not a weird color.

Transportation in Istanbul is newer and better looking than Tehran. We don’t need to use ferries and we don’t have a tramway. Our buses are really old, and nobody is doing anything about it.

They have to change them to electronic with this kind of air and traffic, but that doesn’t make money for the owners of Iran’s fuel companies. It also would reduce the chance of embezzlement and keep people from suffocating in the traffic. So nobody wants that. That’s a big no – it’s better to invest our money in nuclear weapons.

Sorry I lost my train of thought – I stress too much for my age.

The mosque architecture is totally different in Istanbul, especifically the domes and minarets, and their colors. Adhan, the call to prayer, was played five times in Türkiye, but we do it three times a day.

I noticed that people were from different nationalities in Türkiye. Some people wore hijabs and some people didn’t, and they were peaceful. It was obvious that everyone was comfortable and calm.

I have never seen a sparrow get so close to people, but I did in Istanbul.

Istanbul was really crowded but no one would cross a red light. No one would jay walk. And if someone was blocking the road, no one would pressure them and they would help each other.

“Take your time brother” is what I heard from the driver behind us when our taxi driver was helping us with our luggage.

In Iran, we don’t have Starbucks or McDonald’s or a billboard advertising a Netflix series. I do appreciate our little showers that we have next to our toilets, though. Not having those was the rough part of my trip.

I love my Turkish neighbors and everything related to them, even if some of it is different from my brain’s norms. Yes, I am talking about the forks.

Parnian Shahsavary is a Junior Reporter and Senior Illustrator with Youth Journalism International from Iran. She wrote this commentary.

Norah Springborn and Regina López are Correspondents with Youth Journalism International. Springborn is from the United States and López is from Mexico. They took some of the photos.