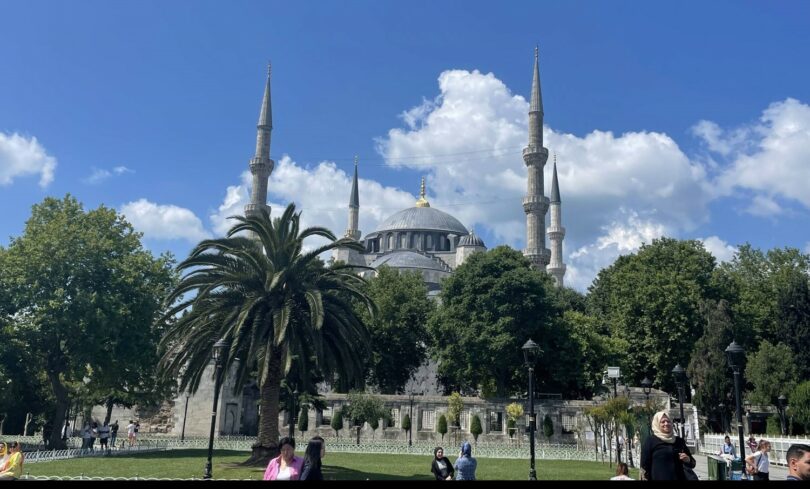 ISTANBUL – I grew up in a non-religious family and consider myself a non-believer, yet visiting religious places during my time in Türkiye opened my eyes to a world in which so many people exist.

Of course, I have encountered religion several times in my life, whether it’s been when studying Christianity and Judaism in school or attending religious events with Christian friends. Despite not having a direct connection with religion itself, these small encounters often leave me feeling invigorated and part of a community.

Religion is an understandably controversial topic for many people for lots of different reasons, but the sense of unity and family it provides for a large number of the religious community cannot go unnoticed.

During Youth Journalism International’s Global Conference in Istanbul, I was lucky enough to visit a few religious places. Each one left me mesmerized by its stunning architecture, peaceful energy and beautiful artworks.

Visiting the Hagia Sophia was a positively overwhelming experience. To respect the religion – it now serves as a mosque – we had to wear a head covering and ensure our shoulders and legs above our knees were covered.

Wearing the headscarf made me feel privileged and lucky to be able to visit somewhere which is so intimate for a lot of people.

I was surprised to see people praying and worshipping as tourists just wandered around admiring the artwork and taking photos. It felt like I was intruding on something personal, and I was desperate to remain respectful of the Muslim culture.

The mosque itself was beautiful. I felt in awe of the artwork all around me, and I could instantly see how big a role religion plays in the lives of its followers.

I also visited the Blue Mosque, another fantastic building. I particularly enjoyed admiring the outside architecture with its five main domes and six minarets. The shades of gray and blue match the mosque’s name perfectly, and the hand-painted blue tiles inside were intricately designed to perfection.

After also visiting Aya Yorgi, a Greek Orthodox Church on Büyükada, the largest of the Princes’ Islands, I enjoyed reminiscing on the differences between the religious places I have visited. Similarly to the mosques, we were required to cover up above our knees, but a head covering was not needed.

But we did have to remain silent while in the church. This made it seem more peaceful and allowed us to properly enjoy and appreciate the detail that goes into these buildings.

Each place was unique, but each place also instilled the same sense of wonder, peace and unity within me. I guess that’s just what religion does to people.

Some days I wish I was religious, mainly for the sense of community and love. But then I remember that many religious communities open their arms for anyone to immerse themselves into their most precious places, and that in itself is a gift.

Holly Hostettler-Davies is a Senior Correspondent with Youth Journalism International from Wales.