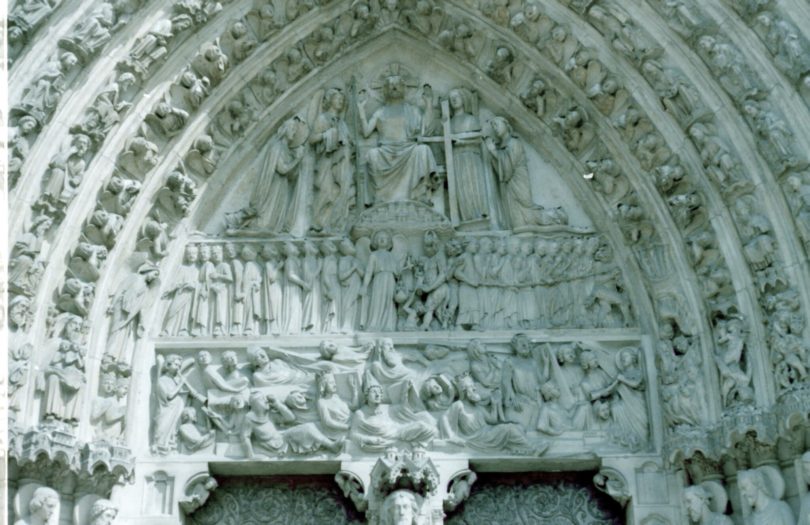 Auburn, Maine, U.S.A. – No one died. And yet the fire that blazed for hours in Notre-Dame Cathedral in Paris today looks and feels like a deep wound to humanity’s soul.

Others can write far more knowledgeably and eloquently than I about the Cathedral’s ancient history, its stunning architectural achievements, and its cherished place at the heart of French culture. But I am one of the hundreds of millions of people who have experienced the profound majesty of Notre-Dame, and for that I feel fortunate.

In 2012, I visited Notre-Dame. I was 16 years old, and in Europe for the first time on a high school jazz band trip. Paris was our last stop before we flew back to America, and we had a few days with very little structured activity. Some people went shopping, others found great restaurants to try, and many of us visited famous French landmarks, including Notre-Dame.

The Cathedral sits on a large island in the Seine River, right in the heart of the city. On the sunny afternoon my bandmates and I were visiting, the plaza in front of Notre-Dame was crowded, with long lines of people waiting to enter.

As we stood waiting, we could hear street vendors hawking sunglasses, T-shirts, and other cheap trinkets of our modern age.

Stepping through the massive doors, however, was like stepping into the past. The interior of Notre-Dame was massive and dark, with light mostly coming from stained glass windows and candles, and in the dim, quiet, cavernous sanctuary, I could imagine, ever so slightly, what it must have been like to worship there during the Middle Ages, the first centuries of the cathedral’s existence.

I dropped a couple of euros into a donation box and took a candle. Thinking of my Catholic grandmother, Patricia Majerus, who had died earlier that year, I lit the wick and placed it among the flickering lights. I stood watching it, hoping that somehow, somewhere, it meant something to her to be remembered in this ancient and beautiful church.

And then, after a while, I emerged into the sun and the noisy city once again.

I saw Notre-Dame again that evening. Our band director had arranged for a short river cruise in the twilight, and viewed from the water, Notre-Dame was even grander than it had been earlier in the day.

I could see the flying buttresses, the towers, and the spire all silhouetted against the sky. Notre-Dame seemed eternal. It was a majestic achievement of stone at the heart of the most beautiful city I’d ever seen.

Of stone, and, as it turned out, of a considerable amount of wood. When I first saw that a fire had broken out at Notre-Dame, I foolishly imagined it to be a relatively minor incident. Wasn’t the cathedral built mostly of solid, sturdy stone? Surely this would be dealt with relatively quickly, and with little damage.

Then I saw the flames engulf the spire. It fell, and my heart broke.

It is, intellectually, a bit odd to weep for a building. Like I mentioned, no one died. And I am neither Catholic nor French.

But in a great many respects, Notre-Dame represents the best of humanity, at least to me.

Its beauty and its history captivated me from the moment I stepped through its doors seven years ago, and though I didn’t realize it, have been with me ever since.

Kiernan Majerus-Collins is a Senior Correspondent with Youth Journalism International.