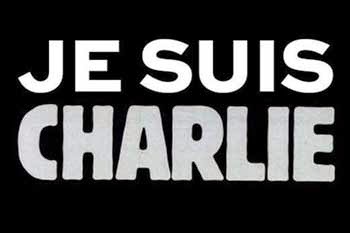 From the website of the Embassy of France in Washington, D.C.
RICHMOND, North Yorkshire, UK – As about 40 world leaders march along with hundreds of thousands of people in Paris today to honor the victims of the Charlie Hebdo assault, it is not clear what can be done to prevent future attacks.

As France and the rest of the world mourn the victims, the three days of terror must serve as a wakeup call that terrorism is still on our doorstep and that not everyone respects human rights.
For the moment, our job is to remember those courageous men and women who died protecting our rights and  providing satire that made us laugh and think.
Charlie Hebdo’s cartoon were provocative and pushed limits, but there has to be a certain leeway for cartoonists and writers to criticize religion.

Without freedom of speech, many publications such as Charlie Hebdo could not exist or operate. They should never face the danger of terrorist attack, something we can all agree on.
The hashtag #JeSuisCharlie (#IAmCharlie) has surged in popularity to show solidarity and support for the victims of the attack in Paris.
Huge crowds in Paris today took to the streets with the same message, one shared all over the world.
What cartoonists did in response to the shootings – issuing drawings in defense of their dead comrades – demonstrated they, too, would not back down. I worry, though, this could have put more of their own in danger.
Nevertheless, I am proud to say that the world has stood by Charlie Hebdo.
While I don’t know what will happen next, for now at least, we are all Charlie.
Robert Mooney is a Reporter for Youth Journalism International.
***
Your tax-deductible
contribution can help support this nonprofit at
www.HelpYJI.org