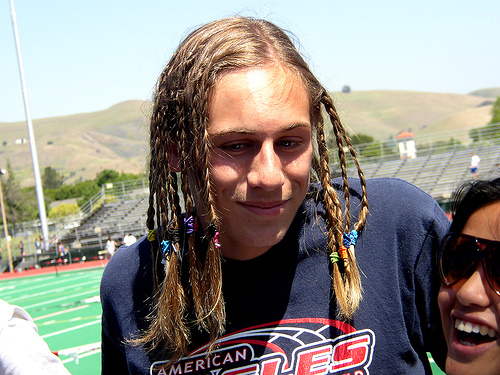 ON TRACK -- Alexander Lamothe, 16, and Denise Africa, 18, on the track at American High School in Fremont, California, in May. (Caroline Liu/YJI)

FREMONT, California – Congratulations! You, a freshman, are about to embark on a four-year journey through high school. You know you’re going in for an experience of a lifetime.

But just what are you going to face, exactly? No one knows for certain. You are an individual, and your own experience will be shaped by your own hands – and very possibly, some of the aspects of high school discussed below.

Do you ever wonder if they ever asphyxiate each other by accident? I do – their tongues could be pretty lethal, especially when it’s in far enough to block off the windpipe.

Relationships in high school are good learning experiences—especially when handled maturely. Mature relationships keep things in perspective. Both parties know that the relationship is not their only reason for living, and can maintain a focus on other things that matter to them – they can maintain a balance, essentially, and can still develop and complement each other.

Perspective brings about another subject of interest.

A crush does not equal true love. Remember that this is high school – and while it certainly is possible, quite frankly, it’s unlikely that you’ll have found your soul mate within these scanty 14 or 15 years of your life.

As for age-gap relationships (senior-freshman relationships, for example), keep in mind that after senior year, things are going to change. The graduate could be moving on to college, where he or she will meet many new people (potential love interests), and the relationship may not last.

My advice is, don’t invest everything in a relationship. Don’t allow it to consume your entire being – all your time, effort, attention, and energy, especially since it most likely will not be worth all that expenditure, and when you could be exploring your other loves.

A warning for girls: Upperclassmen guys will definitely check you out – you’re the new flock of fresh, young, naïve girls.

Be very, very careful. Now, I’m not saying that they’re all determined to date-rape you, or use you and drop you, or as some say, “Hit it, and quit it.”

All I’m saying is that you need to be wary of their motives, sincerity, and why they would be pursuing you as opposed to girls their own age. Keep things in perspective, don’t get big-headed over the attention, and try not to get caught up in anything that could jeopardize you, your reputation, or your future.

Guys: Now, despite all warnings, some (okay, most) freshman girls in your class will succumb to the charming, god-like upperclassmen, and will leave you for perhaps a good year, maybe even two, in pursuit of them.

Don’t take any stock in it – don’t worry. It’ll be over when they realize that those gods are only human. And honestly, it’s a cycle. In a year or two, you yourselves will be the upperclassmen, perhaps giving those freshman boys grief when you take their girls.

Or hey – that hot senior girl sure looks lonely, now that her ex is scoping out your old middle-school crush, isn’t she? Maybe you ought to lend her a shoulder to cry on.

After all, they seem to be broadening out.

High school work is not harder. It just comes in bigger stacks, because for some reason, most teachers believe that you only have one class a day – theirs.

Obviously you’re going to have those days where you nod off in class (I have them everyday), but the best thing you could do is actually pay attention. I sound like such a prude, I know. And I swear – I’m not receiving any side income for spouting out pro-paying-attention-in-class propaganda.
But honestly, it saves you so much time.

Here’s my logic: if you’re going to be stuck in a classroom anyway for those allotted minutes, why not just use the time to actually learn the stuff so that you can get your work done faster instead of getting the teacher to hate you, and having to spend that extra time after school to self-teach just to get the same results, and negatively, less time to party?

If you do your homework regularly, even if it is half-heartedly, you’ll definitely get credit for it. I have to say, the habit I regret encouraging the most so far in my high school life is a 15-letter word that starts with a ‘p’ and ends with ‘-rocrastination.’

Late nights make for groggy, unproductive, and cranky school days. It’ll be in your best interest to get into the habit of getting your work done efficiently, and as soon as possible.

I wish I had practiced what I preach now, because I would have gotten much more sleep.

I don’t know about you, but most people that I know of who have trouble with procrastination are addicted to, or at least, very heavy users of, instant messaging, MySpace, Facebook, television, and internet surfing. While I don’t indulge to the same extent as some of my friends, I admit that these are some of my primary distracters as well. Avoiding these until your work is done is certainly ideal.

Try to avoid energy drinks, like Red Bull, Rockstar and Monster as well.

They’re not healthy for you, and after awhile, they start losing their effect as you build tolerance, much like you would with drugs and alcohol. If that happens, you’ll be at a loss for a stay-awake option – or you’ll end up chugging a pack, which wouldn’t be good.

Now, for the college-bound, your course load matters a lot. You should take courses that will challenge you (AP is a popular option), inspire you, and push you farther past your little safety zone.

But don’t be an AP glutton and stock up on a full schedule that you know full well that you cannot handle. Your grades matter – make sure you can maintain a good grade point average while challenging yourself at the same time.

Good stress makes for growth and development. Bad stress leads to depression and a lot of other bad chemicals released in your brain.

While we’re on the subject of challenging yourself….

Your extracurricular activities should reflect your interests. Don’t be afraid to experiment and test out new things, to see if you like them, and to develop yourself, but in the end, try not to over-commit yourself to everything and anything if you know you can’t handle it.

I know some people who stuff their schedules full of things just because they think they’ll “look good for college.”

It doesn’t work that way. Colleges care about the depth to which you’ll pursue something, not the amount of things you can juggle.

As the saying goes, quantity is not quality.

Just do what you want to do. Don’t do it just because you think someone else wants you to do it. When you do that, you end up becoming jaded, and thinking that students are reduced to mere performers in some sort of dog show, jumping through hoops to impress admissions officers … and it’s not like that.

On a brighter note, there is something for everyone. And if it’s not available at your school, don’t let that stop you. Start it! Extracurricular activities also give you an opportunity to interact with people who share your interests, often those that you may not have met otherwise.

If you have a passion for something, pursue it to the very end.

Most freshmen spend a great deal of time in their first year of high school trying to find their little niche – where they fit into the whole scheme of things, and separate themselves into clearly defined cliques.

I don’t think I need to go through a whole run-down of the different cliques in high schools, since you’ve probably heard so much already that you think you could navigate the social web of high school blindfolded. If you haven’t, look further into the Insider’s Guide for other articles that cover exactly that.

What I will say is that cliques are an inevitable part of high school. You will eventually walk the halls with eyes slapping a label on your back, and you will do the same to others … unless you’re one of the few who are actually above all this childish nonsense.

If you are, just smile nonchalantly at it, because it is just not going to change.

The most impressive freshmen I’ve met were the ones who could probably pass as someone older – not physically, but behavior-wise. I’ve heard freshmen generalized as immature, attention-grabbing fiends who think that they’re “all that.”

Some, maybe, but then again, isn’t there always someone like that, regardless of age?

Some freshmen can be very mature, and I respect them for that.

If you can behave less like a child who thinks they’ll earn favor with the older kids by being silly and making a spectacle of themselves in the public eye with their antics, upperclassmen – and people in general, for that matter – will take you a lot more seriously.

Upperclassmen are not gods. You need not ogle them, put them on a pedestal, nor allow yourself to be belittled by them.

Treat them as you would an equal – with respect – and most of them will do the same for you.

Caroline Liu is a Reporter for Youth Journalism International.