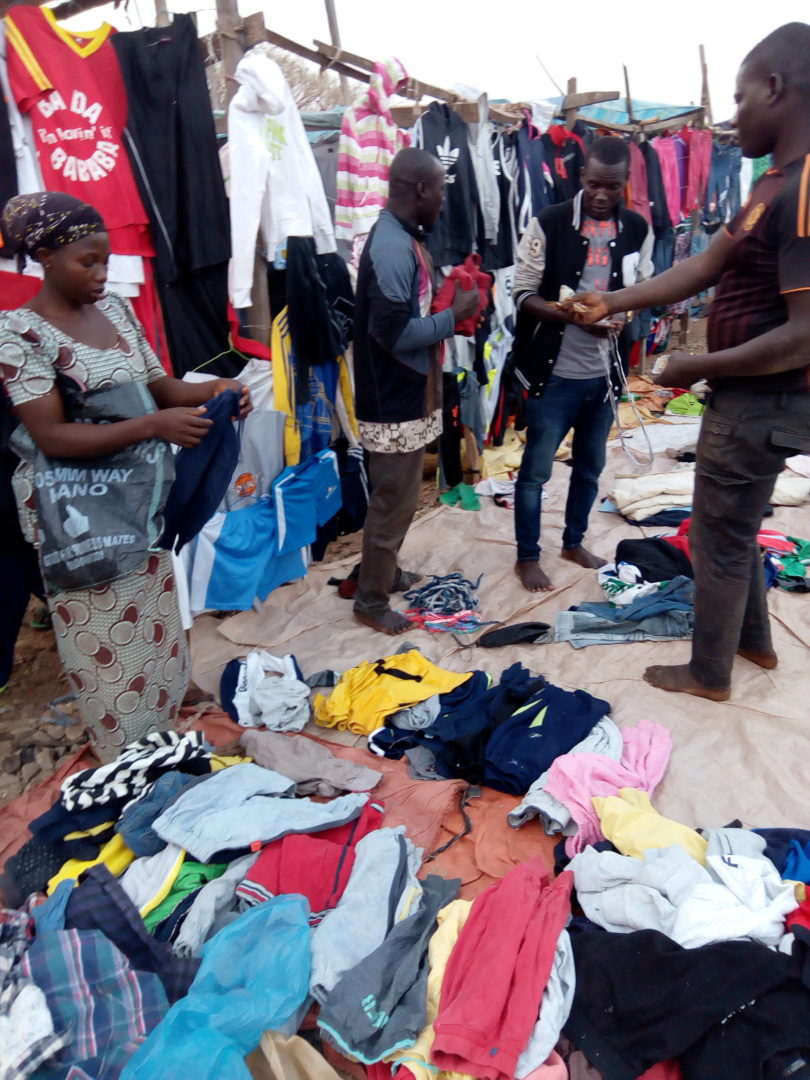 A customer at right offers money for clothes he wants to buy from Mahmud Ibrahim. (Gideon Arinze Chijioke/YJI)

Agyaragu, NIGERIA – As early as 5 a.m. every Friday, Mahmud Ibrahim wakes up to get his wares ready for the day’s market. He needs to be at the motor park at exactly 7 a.m. or else he will miss the vehicle that often transports him and his fellow merchants to their place of business.
Missing the vehicle that leaves at exactly 7 a.m. means that Ibrahim will stand for hours waiting for the next vehicle which often takes a long time to arrive.
“Most times when I miss the first vehicle, I just go back home because even when I decide to go to the market after spending hours waiting for another car, I end up not making enough profit,” Ibrahim said, so it is better to return home and wait for another market day.

Ibrahim lives in Lafia, the capital of Nasarawa, a state in Nigeria’s north central zone. He is married to one wife and together they have three children. But he is not satisfied. He wants to get married to more wives and father as many as 30 children.
When asked why he needs more children, he replied with a fixed gaze.
“We need them to always win elections in the country,” Ibrahim said. “We always win political positions in this country because of our intimidating number.”
Because he needs to get married to more wives and give birth to as many children as possible, Ibrahim has not stopped working hard on a business he started 26 years ago.
“That is the only thing I have got to do as my father did not leave anything behind for me to fall back on,” he said.

In the past, he only sold his wares in Lafia. But with time, because of the need to expand his market, he decided to start coming to Agyaragu market which is a 20- kilometer drive from Lafia.
Agyaragu is a sedate town, lacking the basic grandeur that characterize big cities in Nigeria. No good roads. No imposing structures. No super markets. No hotels. No street lights – nothing good enough to attract the attention of passers-by.
But in its economic viability lies its strength.
At the very heart of the town is a popular market where people from different parts of the state come to transact businesses. From the sale of such products as yam, maize, melon, groundnut, Guinea corn and other commodities, the market is always a beehive of many activities.

The economic viability of the market is such that even businessmen and women from big Nigerian cities with beautifully adorned structures, skyscrapers and good road networks – like Lagos, Port Harcourt, Abuja and Enugu – cannot resist. Every Friday, they travel down to engage in one business or the other. Most times, after a busy day, they sleep over and return to their respective homes the next day.
On entry, a market shopper finds different kinds of people, from the elderly to the young, selling different commodities and haggling prices with their customers.
When a customer succeeds in beating down the price of a particular item, the seller’s facial expression immediately switches from happiness to sadness.
Little children are not left out – they’re often seen moving about with their hands on their heads, firmly holding buckets, usually filled with sachet water and drinks. They are often heard calling out to their prospective customers, sometimes with low tones and most times with loud shouts.
Sometimes, mothers, with babies strapped to their backs, are seen carrying wares around the market even in sweltering weather. When they get tired, they sit. Sometimes, they kneel. Soon, sweat balls start dropping from their cheeks – they need to make money to fend for their families.
At one end of the market, on one side of the railway line, Ibrahim is seen standing and negotiating with a customer. He deals in secondhand clothing, which is popularly known here as Okrika.
After some time, the customer leaves as no compromise is reached. Soon, another comes and an agreement is reached.
Most of the times, Ibrahim screams to draw the attention of customers. And each time he does, he throws some of the clothes to the sky.
“Come and buy your cheap clothes here. If I go, I don go be dat,” he calls, meaning, as soon as I leave this market, you are not seeing me again. He goes on to say that the clothes he’s selling are strong and will last a long time.
For Ibrahim, this is part of what he does to attract the attention of customers, as he is not the only one who deals in second-hand clothing. His colleagues also have strategies they employ just to attract the attention of passers-by.

When asked if there are challenges he faces in his line of business, he responds, often swinging from English to Hausa, his local language. According to him, the prices of the clothes have gone high and it makes it difficult for them to buy in large quantity.
“Last two years, we dey buy some clothes for N500 ($1.39) and sell them for N700 ($1.93). But now, the price done high because we dey buy am for N900 ($2.50),” said Ibrahim, explaining that the climbing prices are sometimes out of reach for his customers. “And when we bring them for market, customers no dey come buy for ($3.31).”
He said that the prices of clothes, which have gone high as a result of harsh economic realities in the country, will come down again so his business can start bubbling again.
As soon as it is 6 p.m., merchants begin to pack their commodities as they get ready to return to their respective houses. For those who live near the market place, motorcycles are enough to take them home. But for those who come from far distances, cars become the only option. Motorcycle riders are often seen gesturing to people as they come out of the market.
For Ibrahim and his fellow merchants from Lafia, 7 p.m. is the time they leave Agyaragu market. That’s when they return home to the families they left early in the day in search of money.
Gideon Arinze Chijioke is a Senior Reporter with Youth Journalism International.